The ’80s has to be the golden age for fight flicks. Sure, the hardcore will go on about the kung fu films of the ’70s (and to be fair Enter The Dragon will always be the greatest fighting film of all time) and they still make all those post-Crouching Tiger wire-work films which are still popular (even if they do tend to star the charisma vacuum that is Jet Li) but the ’80s has it on lock down.

While Bloodsport remains the best the decade had to offer, we’ve always had a soft spot for Best of the Best. How could you not? It’s more or less a perfect film.

It tells the story of Alex Grady, a blue-collar worker with fabulous hair who isn’t going to let a massively messed up shoulder stop him from chasing his dreams of being a karate champion. Having lost his wife previously, Alex lives with his son and his mother and he gets the invite to try out for the US National Karate Team, he has to accept (even if his mum isn’t very happy about it). 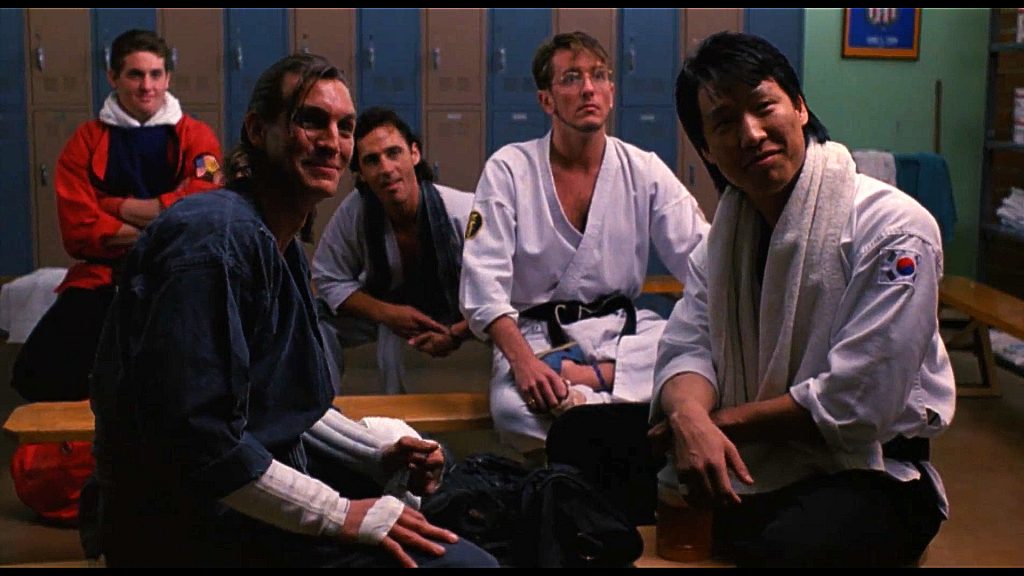 He and four other fighters pass the try-outs, which sets up the majority of the film, essentially a massive training montage, before we eventually reach the film’s final quarter which is the tournament itself.  Playing out as five one on one matches against the five scariest Koreans not called Kim Jong something.

It’s a fine film, combining some decent, showy martial arts with a heartfelt tale of friendship and family and, if you’ve not seen it, then it’s a must-see for all fight flick fans.  But why?  Well, let T8MC teach you a little something.

1. Eric Roberts.  Back when Eric Roberts was a big star, but one that was trying to make a name for himself away from his superstar sister Julia, he had it all.  Good looks, great hair and a ton of intensity.  Best of the Best may be his best ever performance.  Wise-cracking, cocky and funny but also one that is heartfelt.

His motivations for competing are tested when his son, the five-year old Walter who, hilariously, is played by a ten year old quite obviously, is hurt in a car accident but when Walter recovers, Eric’s performance as Alex tries to get back in the team is genuinely moving.

He’s also fairly credible in this from a martial arts perspective, throwing some clean looking techniques and getting his head kicks up there nice and quickly. 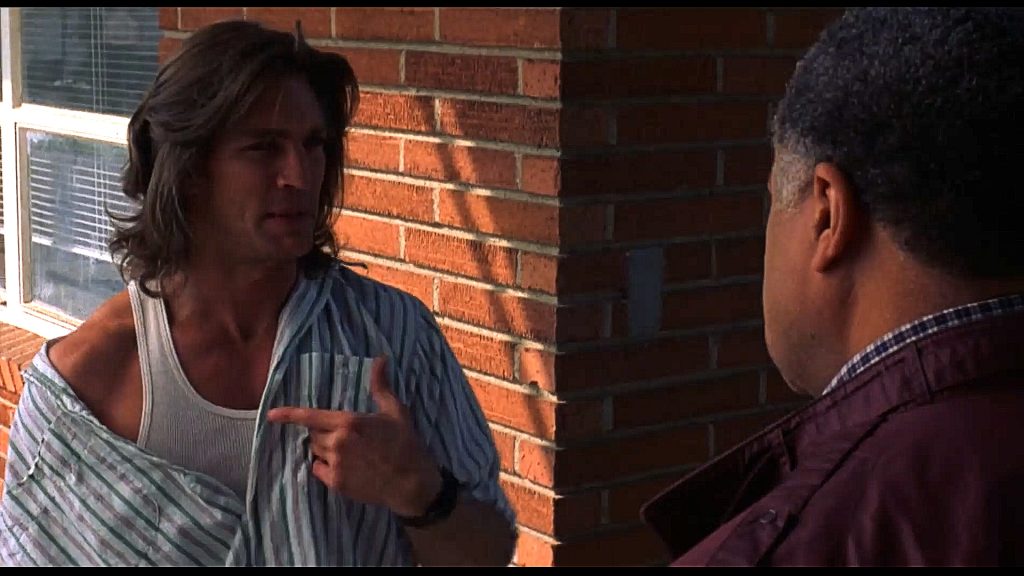 2.  Phillip Rhee.  While Eric, as Alex Grady, is set up as the film’s star, from a martial arts perspective Tommy Lee, as played by Philip Rhee, is the hero.  A legit martial artist in his own right, Philip’s high flying displays of Taekwondo are remarkable.

His acting is pretty good too and the bromance he has with Alex is up there with Apollo and Rocky in Rocky 3 (the best Rocky).  Mostly though, he’s just very very likeable.  There is lots of mercy in his dojo. 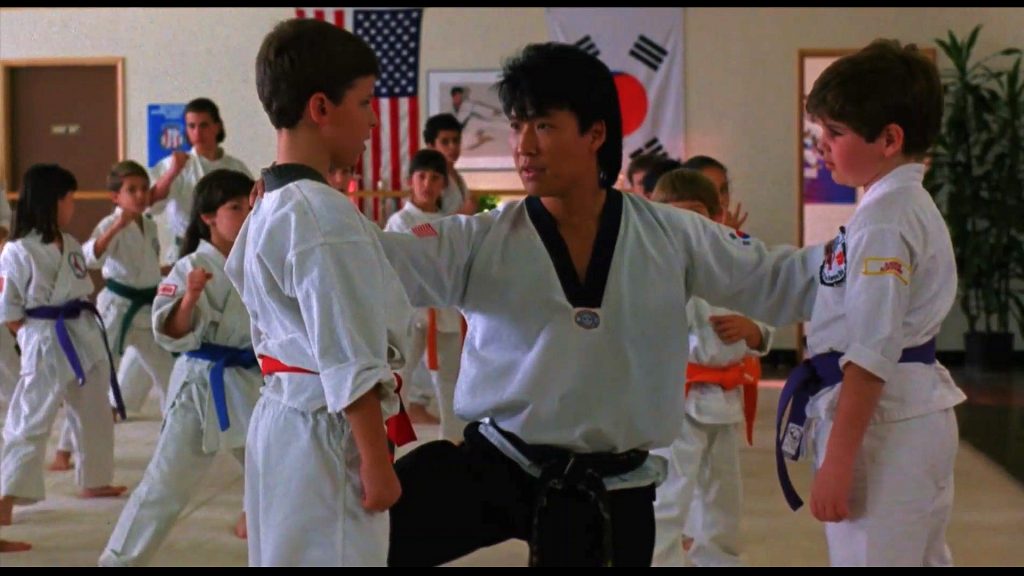 3.  Chris Penn.  The other four actors playing the US team, including Eric Roberts, seem to know what they are doing but Chris Penn had clearly never thrown a kick in his whole life and so watching him trying to be a high level karate practitioner is pure comedy gold.

But that’s not to say that he doesn’t bring anything to the film.  His role as Travis, a redneck thug who has no interest in getting along with his teammates, provides a little drama and plenty of humour as he torments the others before going through his own transformation into a loveable team player. 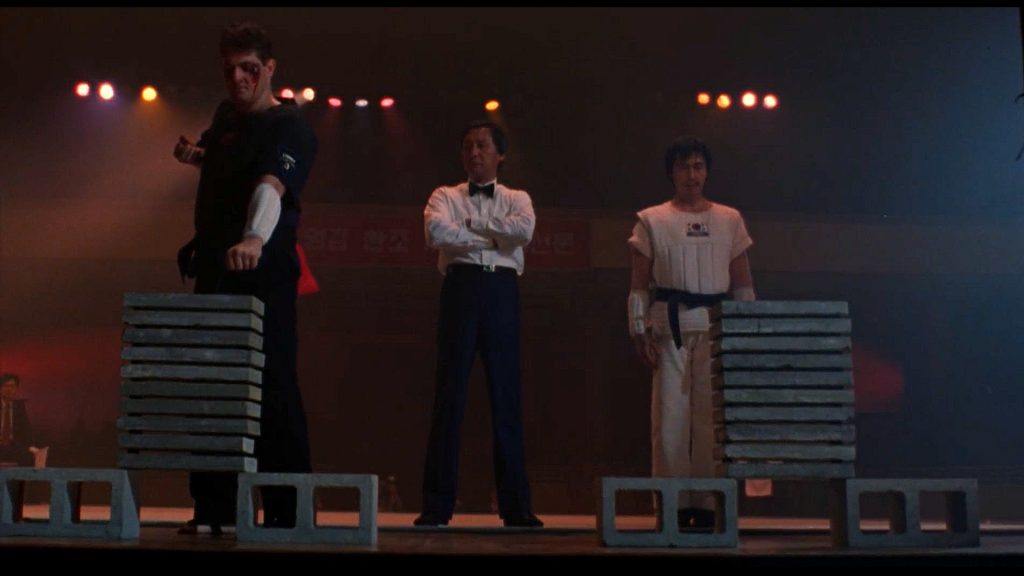 4.  The entire training part of the film is awesome but also hilariously stupid.  The awesome part is seeing the US team go from a sloppy group of fighters into a tough, well-trained unit while also seeing the Korean training which mostly involves them doing knuckle push ups on concrete and getting hit with sticks, while not giving any fucks.

But the stupid stuff is also good.  The head coach is a fat, old James Earl Jones who doesn’t have a clue about martial arts and instead just spends most of the film making everyone hate him.  But this just makes his occasional moments of almost-fatherly affection and dry humour all the better.

And then you have his coaches.  Don Peterson is his main fighting coach and no-one seems to question this despite the fact that Coach Don is a total nerd who is more interested in statistics than fighting.  In fact, during the BRILLIANT bar fight scene (more on that in a bit) he blocks a punch with his FUCKING LAPTOP, apologises and runs away.

The other coach is Catherine Wade who hilariously tries to teach the team yoga and meditation while spewing out faux-spiritual woo every chance she gets all of which is ignored hilariously by Travis (Penn) who spends her sessions sunbathing.

Quite how this trio of coaches are put in charge of a national karate team is a mystery but it still makes for some really fun watching.  And anyway, this was all pre-UFC when none of us knew anything about real fighting and so it didn’t matter that it wasn’t in any way credible. 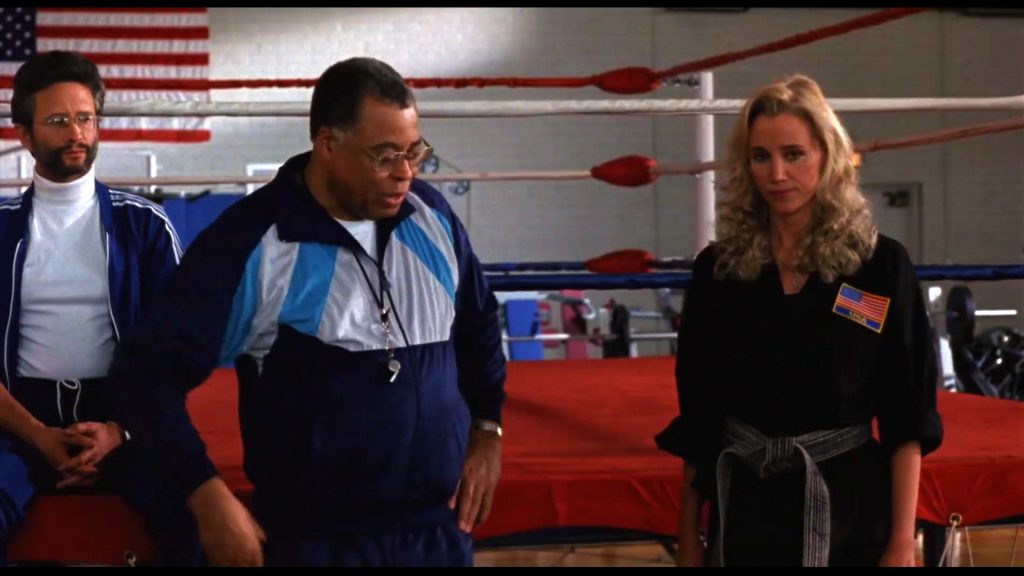 5.  Sonny and Virgil.  The other two fighters in the US team both bring their own personalities to the film.  Sonny is an Italian cliche who likes to chase after women and has a double digit IQ while Virgil is a very likeable Buddhist.

They are both decent martial artists and are fun to watch in training and also in the tournament and their parts in the bar scene are both legendary.

Sadly, both actors are dead now. 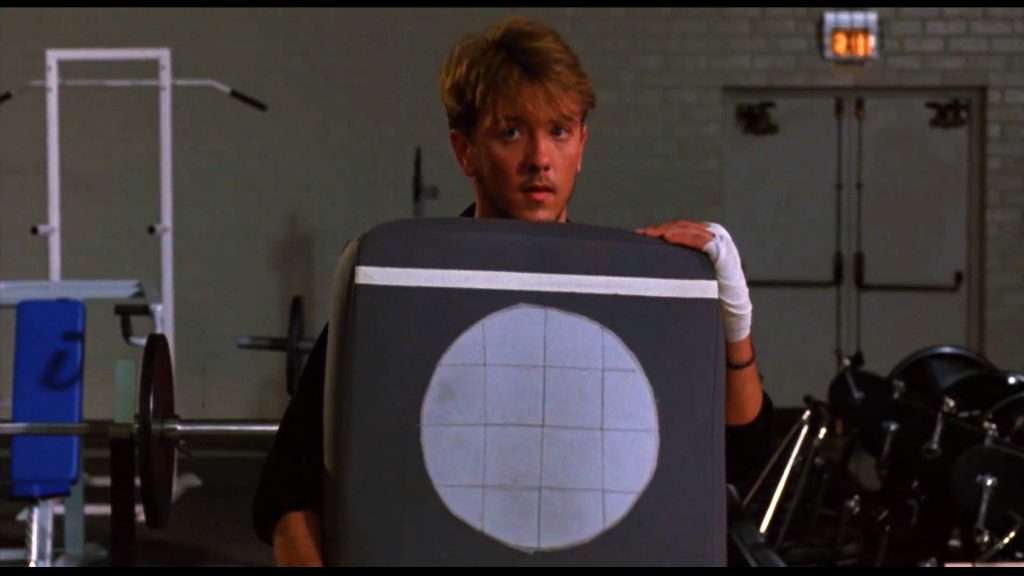 6.  The bar fight.  Before their three months of training begins, Coach Ruzzo gives the team one last night of freedom and so they all head off to a redneck bar.

Sonny spends the evening hitting on girls unsuccessfully while Virgil spills coffee on a lady and turns that into a successful pick up before everything goes to hell.

Of course, that’s all the fault of Travis who picks up a local skank in front of her dickhead redneck husband and when he slips the hubby’s punch it lands right in the face of the unfortunate lady.

Tommy attempts to talk everyone down, even going as far to high kick a cigarette out of someone’s mouth to scare them off.  Of course, these rednecks aren’t about to back down and what results is one of the best bar fights in cinematic history. 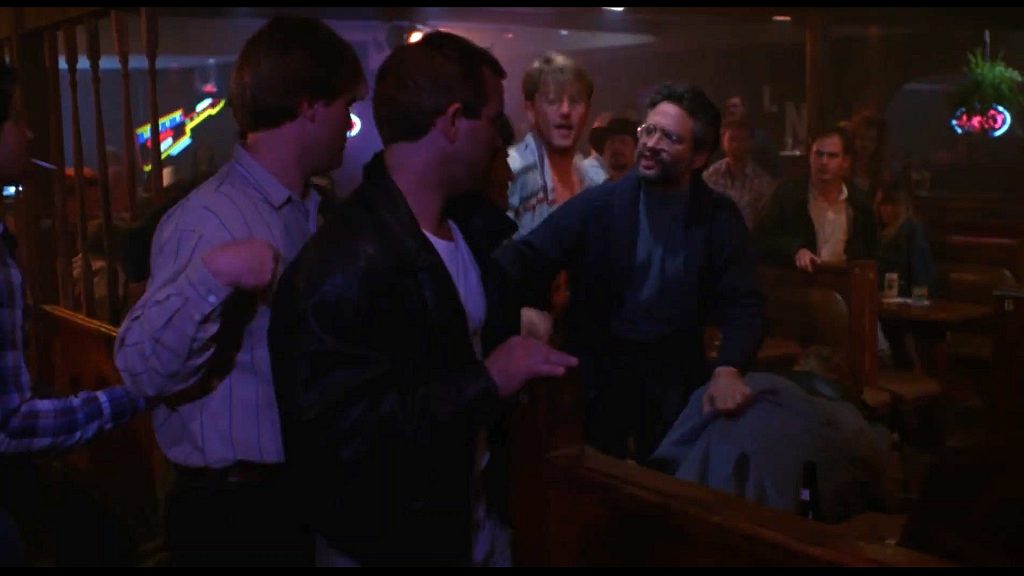 7.  Bduuuuurrrrrrrrrrrrrr!  The intensity of the Korean team is something to behold.  From the training montage to the fights themselves, the Koreans are truly imposing and terrifying but it’s this quote from their head coach that remains my personal favourite part of the movie. 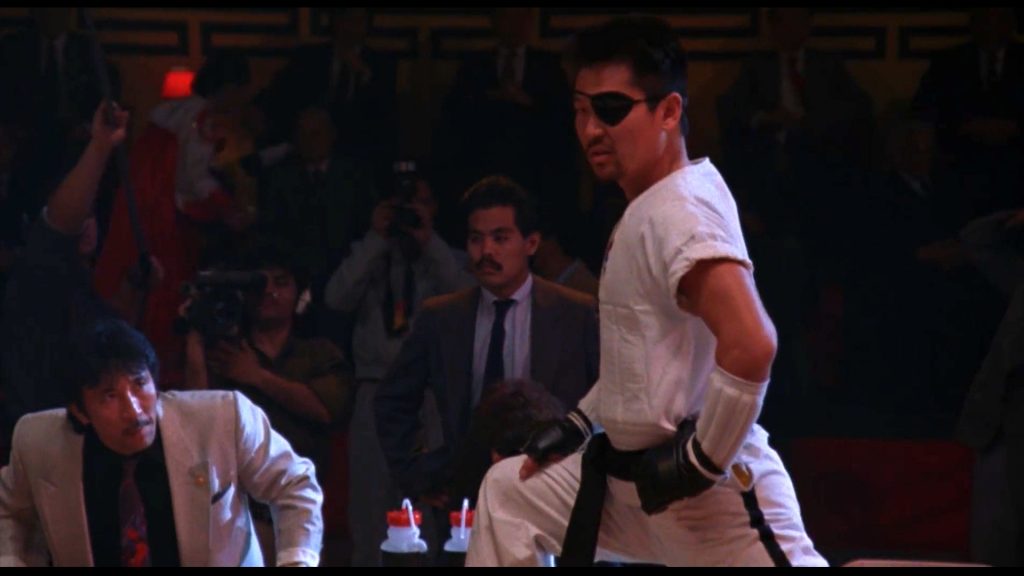 8.  All the heartstrings.  If, like us, you’re hardwired to fall for this stuff then this film plays your heartstrings like it’s Kerry King out of Slayer.  From Eric Roberts pleading to rejoin the team (and his heroic comeback from injury in his fight) to Phillip Rhee having a change of heart when he quits the team, there are plenty of moments that spinning kick us right in the feels.  But it’s the film’s ending that makes us want to blub like a baby every time we see it.

No, YOU’RE the one who’s crying.  But seriously, I just rewatched the film for this piece and it still fucking gets me EVERY SINGLE TIME. 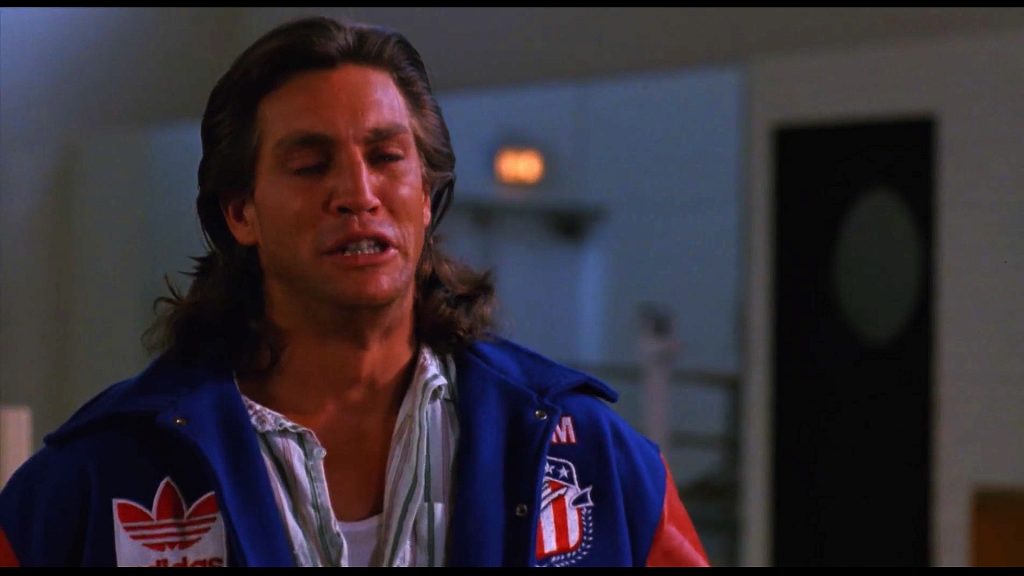 9.  Tommy Lee vs Dae Han.  A huge part of the plot involves Tommy Lee having to get over the childhood trauma of seeing Dae Han kill his older brother in a previous tournament.  As both of their respective team’s best fighters, the pair are matched up for the final fight of the tournament which forces Tommy to face all of his fears.

Dae Han is terrifying.  A seemingly unbeatable fighter who doesn’t let the fact that he only has one eye slow him down at all.  He’s tough, talented and merciless and does everything he can to gain an advantage against Tommy.

The fun thing is that the actors, Phillip and Simon Rhee, are brothers and both very talented martial artists in real life.  And so their fight is spectacular with some truly impressive techniques on show in a high-flying display of Tae Kwon Do.  Maybe the moves are a little over the top with plenty of flying kicks and spinning heel kicks but they make it look as real as possible, with the viewer feeling every impact. 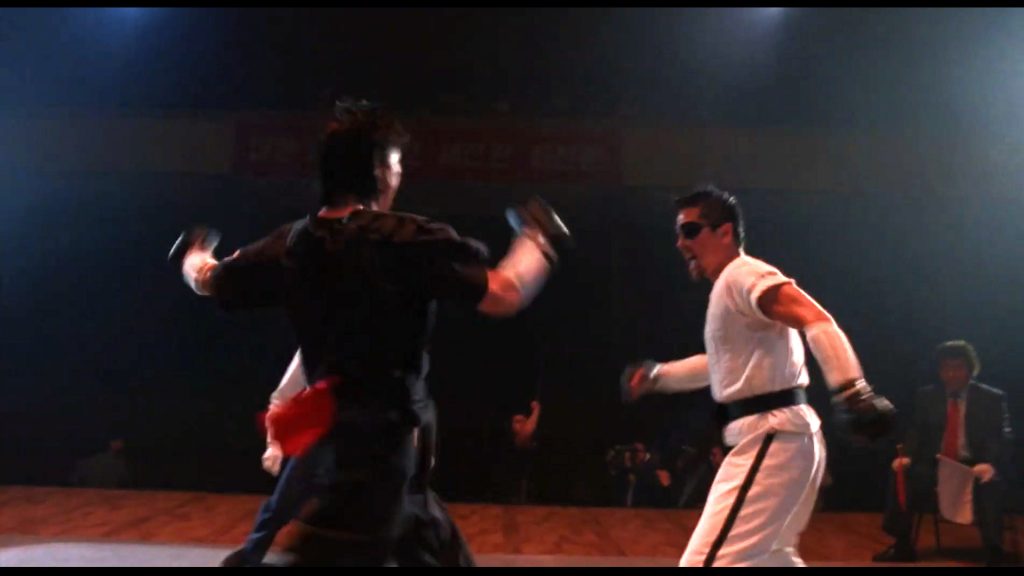 10.  The ending.  We won’t give it away here but the ending is perfect.  By the time it comes around, you feel totally invested in the team and their journey and like we said before, it’s an emotional climax to a great film. 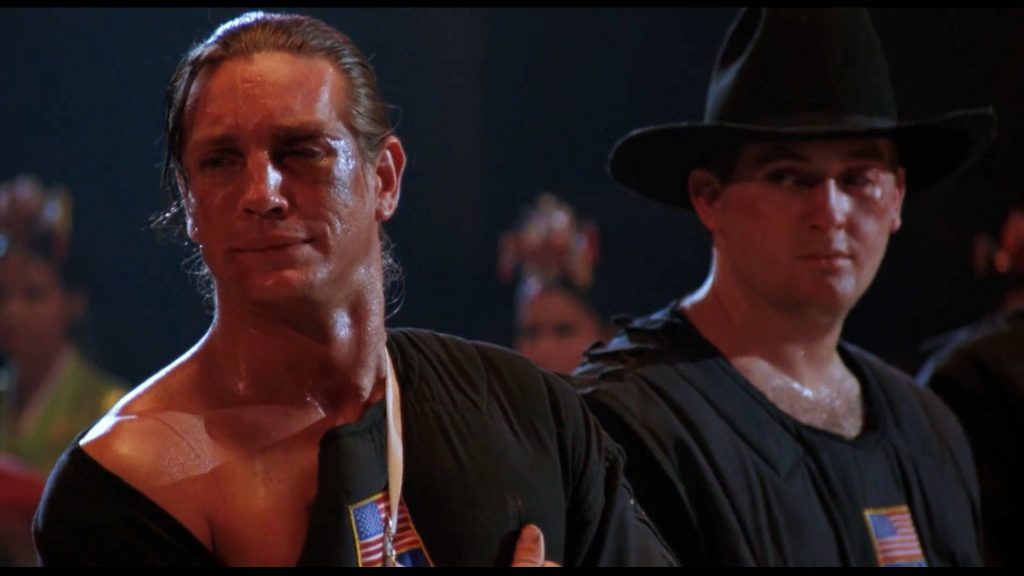 Phillip Rhee wrote the story for this film and went on to write and star in the film’s three sequels.  The only one that was truly essential was Best of the Best 2 which takes the story down a darker route and reunites Tommy, Alex and Travis while also introducing our favourite ’80s actress Meg Foster to the series.

Eric Roberts left the series after that and so parts three and four are less good but still worth a watch. 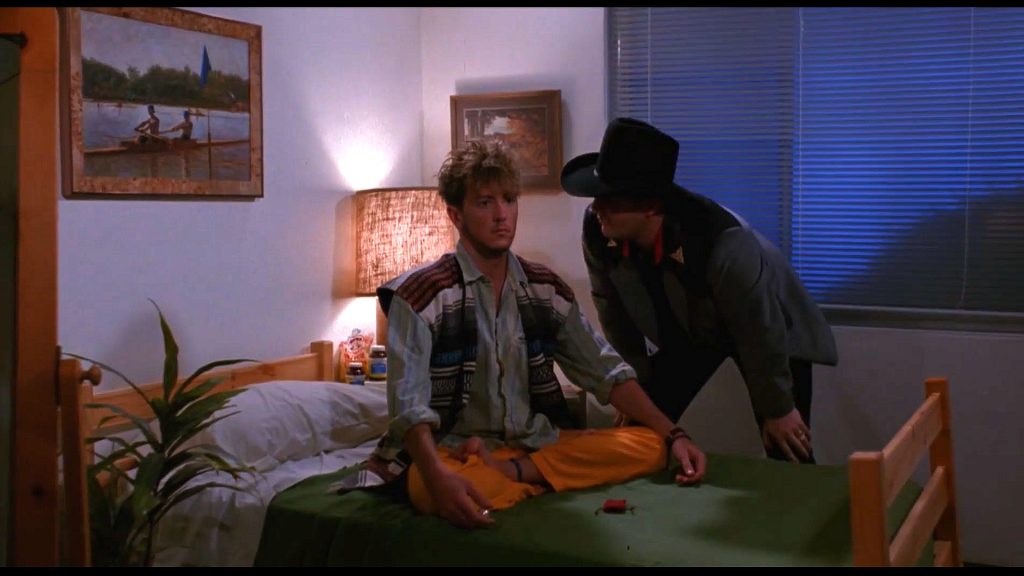