This collection of Australian horror tales is very much a modern portmanteau in that it has wildly varying themes and a lot of stories to tell. Each tale has a different director who were all tasked with submitting a short that had a ‘blood’ theme.

That’s not a very narrow remit, so A Night of Horror Volume 1 takes quite a few thematic jumps as it goes along but, luckily, there is a wraparound story that does its best to hold everything together.

That story (‘Art Imitates’) opens with a woman waking up in a room with no idea how she got there or who gave her the head wound that knocked her out in the first place. She enters a room to find a blood-splattered canvas with a box below. The box is making a humming sound, a clue to the first story. The linking story is visited after each tale, giving a new canvas and object each time. 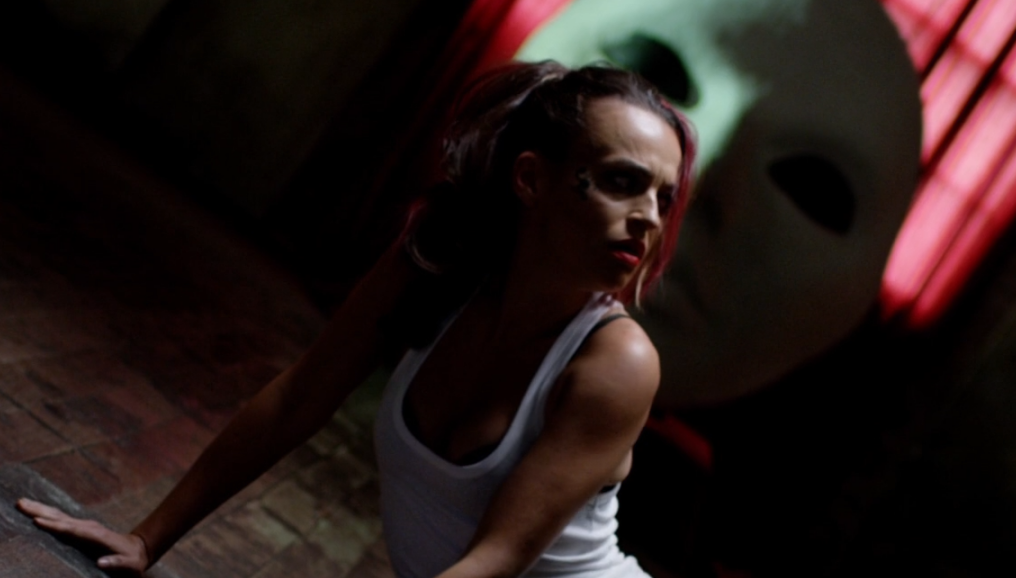 A woman is struggling to identify the source of a low humming sound in her apartment. After doing everything she can to find it, she calls the building’s janitor in. Unable to do anything, he leaves and she’s left alone in the room.

She can’t sleep and eventually starts losing touch with reality. Unfortunately this story doesn’t really go anywhere. Explanations are never given and the story has no real conclusion. A poor effort that puts the whole anthology on the back foot. 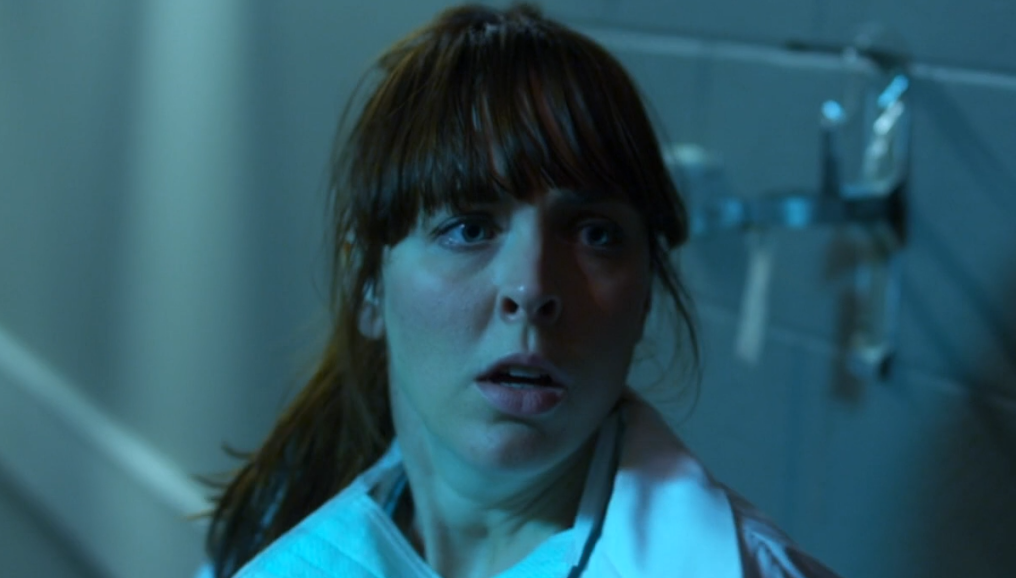 Thankfully, the film’s second story is phenomenal. A coroner is working late at the morgue when she has an unpleasant exchange with the old security man on duty. However, she soon realises that he’s the least of her problems.

The old lady corpse on her slab has a funny habit of moving around and just as the coroner is getting used to the idea, it turns out that the corpse is ready for some frantic murder action.

However, she can’t move as long as you can see her echoing a Doctor Who episode that I heard about but never saw because Doctor Who is bullshit.

Anyway, this story is filmed brilliantly and the movements made by both parties perfectly set up what is one of the scariest portmanteau stories we’ve ever seen. And we’ve seen LOTS of them. 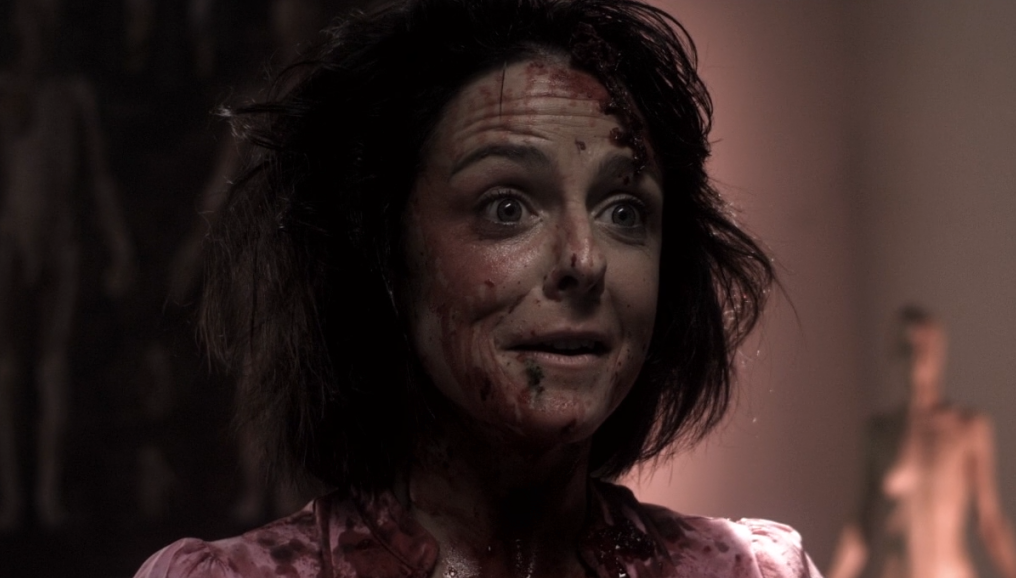 It’s not big and it’s certainly not clever but this comedic tale is focused on a cosmetic doctor whose enhancements all start to degrade at the same time.

Part body horror/part gross out comedy this story works on both levels and while it really doesn’t have much to say, it’s very entertaining if you don’t ask two many questions and does provide a little bit of light relief from the terrifying previous story.

Setting the tone all the way back to miserable, this story is about a psychiatrist and her patient who has been suffering from horrible halucinations ever since she witnessed her father’s suicide.

This tale is reasonably unsettling and has a strong finish, unlike so many portmanteau stories, and definitely helps to cap off a strong opening half to this collection.

A woman is returning home from an affair with a work colleague and ends up on a train carrying some very odd passengers including the titular priest.

Essentially a morality tale, this story would work a lot better if it wasn’t hamstrung by some by-the-numbers visuals and characters. If anything it feels like a bad music video but the story does have a point and it kind of works.  And we’re so used to these kind of tales going nowhere so it was nice to see this one reach a conclusion.

A young girl goes to stay at her Grandmother’s house but Gramms is acting very strangely and eating basically everything she can find, sort of like a weird proto-zombie.

A disturbing and unpleasant tale, this one is a little slow (although mercifully short) and doesn’t really achieve anything and barely justifies its inclusion in this collection. 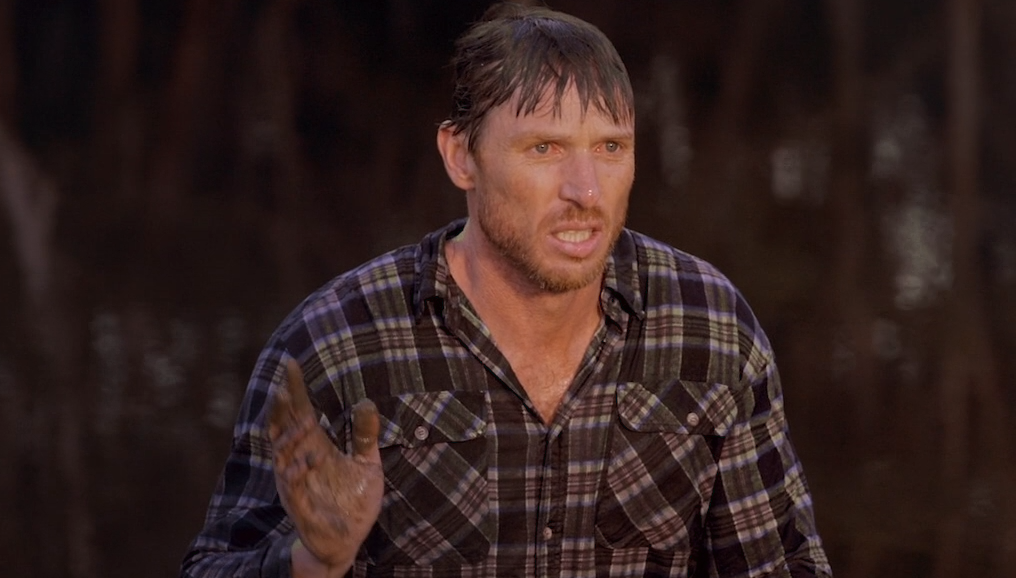 A farmer is trying to hold his family together together following a bereavement but his mental state starts to become an issue.  Is he being manipulated by external forces or is he just unwell?  Either way his whole family is in danger.

This story is the longest on offer and sometimes feels like it but is beautifully shot, even if it struggled to keep our attention.  Especially when its cinematography starts to turn a bit too arty for its own good.

A Night of Horror’s final offering is a standard ‘cabin in the woods’ horror story where dark spirits that inhabit the forest decide to torment their visitors.  It takes a little while to warm up but when it does it has a nice little gimmick to it that does ensure that this story comes with some decent scares. 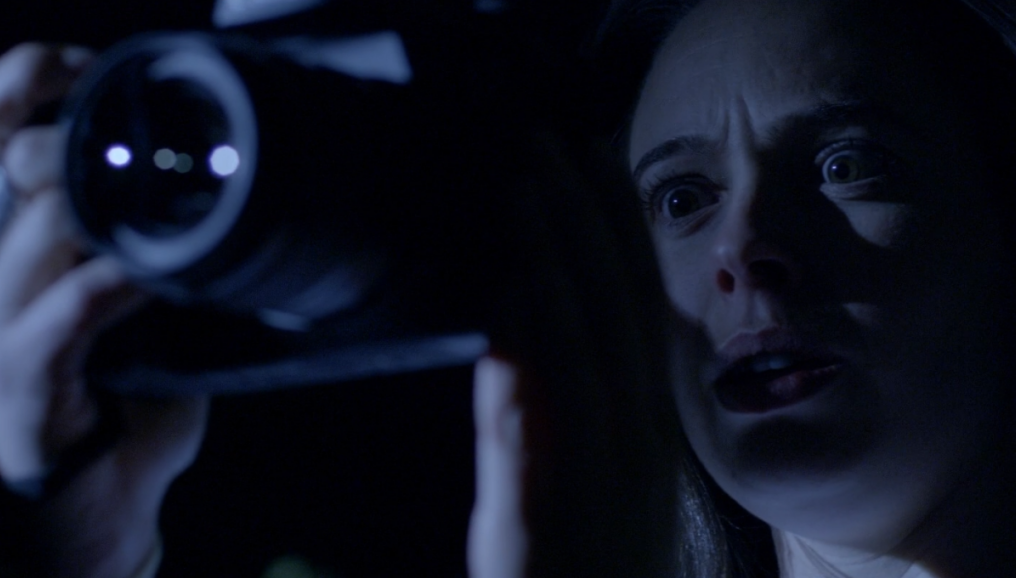 A Night of Horror is an interesting anthology.  The linking story is weak but we appreciated it being in there and while some of the stories misfire, the overall quality is much higher than we’ve come to expect from modern examples of the genre.

The highlight, Point of View, may well be the most effective portmanteau story we’ve ever seen though.  When a story has us shouting at the screen and genuinely being scared, that’s a rarity.  We’ve been showing it to friends and family ever since, just to freak them out too.

For that story’s inclusion alone, this is a film we thoroughly recommend but this collection has plenty of reasons outside of that to recommend it for.  We’re looking forward to Volume 2.