Hello, Loves. Those of you who have been paying attention will remember our recent Creepshow article. As we said, “With only the first and fourth parts really letting the side down, Creepshow is a really solid anthology that deserves its cult status.”

We loved it back in the ’80s and so were pretty excited to see Creepshow 2, another anthology featuring more Stephen King short stories. Now we didn’t like it nearly as much as the original and there’s a lot less content on offer but Creepshow 2 still has its moments.

It opens with Old Chief Wood’nhead a cautionary tale of what happens when you rob a store that has a wooden statue of a native American warrior outside. The robbery goes wrong and the owners are killed, which pisses off the chief no end. The story plays out with our wooden warrior tracking down the robbers and killing them viciously using a big knife. Nice.

What this story lacks in realism, it makes up for in charm and daftness and with it’s scalp-me-tender larks, it’s not the worst way to open up a portmanteau. 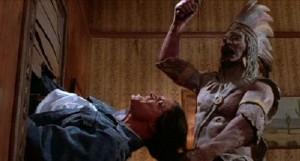 Just a little off the sides and back please.

Creepshow 2’s most memorable story comes in the form of The Raft, a classic slab of horror that sees four college students – each fitting the usual horror archetypes of jock, slightly sensitive guy, party girl and bookish lady – who arrive at a secluded lake.

Pretty quickly their attention turns to whether or not they want to go swimming in the cold waters and eventually decide they should. The gang start to make their way over to a large wooden raft in the middle of the lake and as they make their way over, stupid party girl Rachel gets chased and eaten by a blob that looks like a small oil slick.

Cue the three remaining survivors getting terrorised by said oil slick with one particular member dying a particularly miserable death. He’s the douche though so it’s all quite funny. And when the more thoughtful of the two guys turns into Mr Molesty-hands, you know that his prospects aren’t looking good either.

The Raft is great. A really tense tale that is told well enough (although I recommend reading the original short story as the deaths are even more harrowing in that). This is the highlight of the movie. 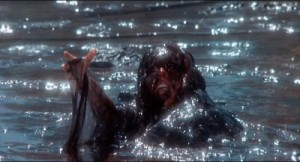 Jump in! The water’s lovely!

The third, and final, part is The Hitch-hiker, which marks its main character for death immediately when it opens with her cheating on her husband with a gigolo. In order to keep the liaison secret, she speeds home afterwards along unlit roads and accidentally ploughs into our titular hitch-hiker.

Deciding ‘fuck him’, our immoral starlet continues on her way home thinking that she’s in the clear. That is until the very same hitch-hiker appears at her window again. And again. And again.

Every time she sees him he says ‘thanks for the ride, lady’ and she twats him with the car again until he’s a bloody, battered but undead mess. Eventually she makes it home though but don’t expect a happy ending for her. 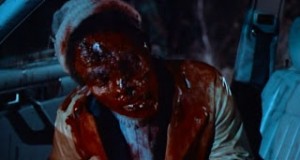 It’s a good way to end the movie and helps Creepshow 2 defy the rule that every portmanteau has a terrible story in with the good ones. That said, The Raft aside, Creepshow 2 doesn’t hit too many stellar highs either but it’s a solid example of the genre and while it’s more consistent than its predecessor, it’s just not quite as much fun.