Barely scraping by, thanks to being released in 1990 and for only having two parts (with no linking story), Two Evil Eyes may not be the classic example of a portmanteau horror but it does just enough to satisfy our ENDING LUST FOR ANTHOLOGY HORROR MOVIES.

The film’s two parts are based on a couple of stories by Edgar Allan Poe and feature the considerable directorial talents of George A. Romero and Dario Argento.  The movie itself was treated to a DVD release in 2010 by Arrow Film and Video (which is the version we watched).

So, it starts with the brilliantly titled ‘The Facts in the Case of Mr. Valdemar’ which is the Romero part of the movie and feels like it.  It tells the story of Jessica Valdermar, played by the fantastic Adrienne Barbeau, your standard gold digger who is watching her fabulously rich, but totally dickish, husband slowly die of old age.

The film makes sure to paint her in an unsympathetic light, especially when you realise she’s been having an affair with her husband’s doctor Robert Hoffman (played by fake Chris Sarandon – Rama Zada from After Midnight). 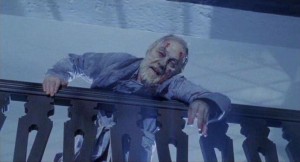 That said, the old fella seems happy enough to sign off all his wealth to wife, despite his obvious disdain for her.  The thing is, it turns out he’s being hypnotised by Dr Hoffman.  Once he dies, the process should be complete and the doctor and widow will be sitting pretty on a lot of money.

The only worry is when Mr Valdermar dies a little sooner than expected and they need to keep the body on ice while the paperwork is being completed.  This is a Romero joint though and so it’s not long before Jessica starts hearing moans and groans coming from the freezer.

Dr Hoffman examines the obviously very dead body but soon hears the noises himself and when Mr Valdermar starts talking to him, things get downright creepy.  It turns out that because he died while in a trance, he’s trapped in limbo and warns the treacherous couple that ‘the others’ want to use his body to enter our world.  Uh oh! 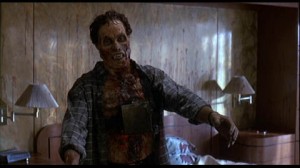 Dr Hoffman attempts to break the hypnotic trance but is interrupted by Jessica who thinks ‘fuck this’ and puts a couple of bullets in the corpse.  Big mistake.  That leaves his body to be taken over by the dead and at this point everything becomes spectacularly scary.

Romero’s excellent direction, and some decent make-up, give this otherwise fairly typical portmanteau segment a fair bit of weight and the story has plenty of time to grow thanks to being half of the entire movie.

A tad darker than the usual anthology tale, and directed without the usual Creepshow-style silliness, this is a legit scary tale and one of the best we’ve seen in a portmanteau.  Of course, there’s usually a rotter in any film of this type and so we weren’t expecting much from ‘The Black Cat’, the film’s other half.

Where Romero comes with a standard tale of undead folks and big consequences, Dario Argento’s half is a lot more pretentious and unpleasant.  As you’d expect from an Italian director. 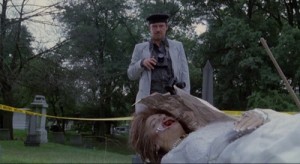 It stars Harvey Keitel, who was just about to steal the show in Reservoir Dogs, as Rod Usher, a crime scene photographer with a dubious obsession with the macabre.

The film opens with him photographing a murder scene.  A mostly naked woman has been cut in half by a giant blade and the camera is pointed right at her muff.  Italians.

Anyway, after that showy introduction, the film follows Usher as he returns home and is introduced to the titular black cat by his WICKED ANNOYING girlfriend, Annabel, who is all a bit hippy trippy and weird. 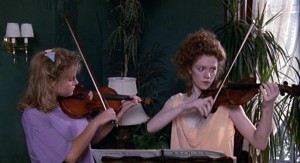 The cat hates him though and before the long he’s strangling it for the photo opportunity.  Annabel, already knowing that he’s kind of a dick, accuses him of murdering her missing cat.  He denies it though and they go back to their usual disfunctional relationship until she spots his new book in the shops.  A photographic expose of cruelty in New York that has a photo of the cat being strangled.

She decides to leave him but before she can move out, the cat somehow finds him in a bar (the barmaid is Sally Kirkland who we love because she was in Best of the Best) and he takes it home and decides to kill it again.

As he’s using a piece of cord to lynch the cat, Annabel sneaks in and twats him on the head and runs off.  Usher chases them though and hacks Annabel to death with a meat cleaver. 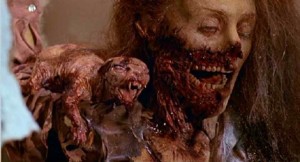 The next part of the movie is probably the best bit.  Usher then creates an excellent alibi after constructing a new wall to hide Annabel’s body behind.  He drives around with a dummy with a photo of her face on it (with a pulley system so that it can wave at people) and takes it on holiday.

Everything seems to be going well until one of Annabel’s violin students shows up asking questions and eventually calls the police who come to investigate.  Usher does a fantastic job of convincing them of his innocence until noises start eminating from the fake wall.  They go to check it out and it turns out the weird bastard cat has left a bunch of a skinless demon cats in there (or something, it’s an odd scene).

The final scene is brutal and farcical in equal measure but wraps up the tale reasonably well.  It’s a lot harder to like ‘The Black Cat’ with its pretentious style (it even has a bizarre dream sequence in it) and slightly mad story but it’s still a pretty good tale and in combination with the first story, this is a solid portmanteau effort.

The Arrow DVD release seperates both stories with their own selections on the top menu and presents them with excellent clarity and quality.  The lack of extras (just some trailers) is disappointing but the film itself is absolutely worth a watch.