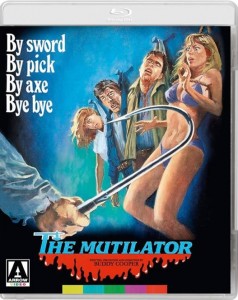 We’re not sure what criteria Arrow Films use to pick their releases but they’ve truly outdone themselves with The Mutilator.  This by-the-numbers slasher is pretty much a study in the genre, adhering to all the templates and genre conventions you’d expect.  Despite this, it managed to truly surprise us.

The Mutilator was originally titled Fall Break, before being changed for marketing reasons (the ’80s did not give a damn!) and was the first, and last, project for both Buddy Cooper (writer/director) and John S. Douglass (co-director).

The film opens in spectacularly odd fashion.  A lady is baking while her young son (Ed) decides, for some reason, that a good present for his father would be to clean his guns.  While cleaning the guns he… well… it’s not enough to say accidentally shoots his mother (it’s an accident but he does seem to inexplicably aim at the door that his mother is behind).

Suffice to say, his father is livid and immediately goes mad (as evidenced by him sitting with his dead wife and having a drink as she bleeds all over the place.

Now at this point, we didn’t know if the film was American or European.  It looked kind of rubbish and Italian and at one point Ed says ‘mama’ just to muddy things further.  However, the film soon leaps to present day 1984 and Ed turns out to be an American college student.

Sat with his friends, all lamenting having nothing to do over fall break, he gets a phone call from his dad asking him to visit his beachfront condo and close it up for the winter.  He doesn’t want to do it (his dad is batshit crazy) but it’s a horror film and young people do dumb shit and love to stay in places, so they all decide to go. 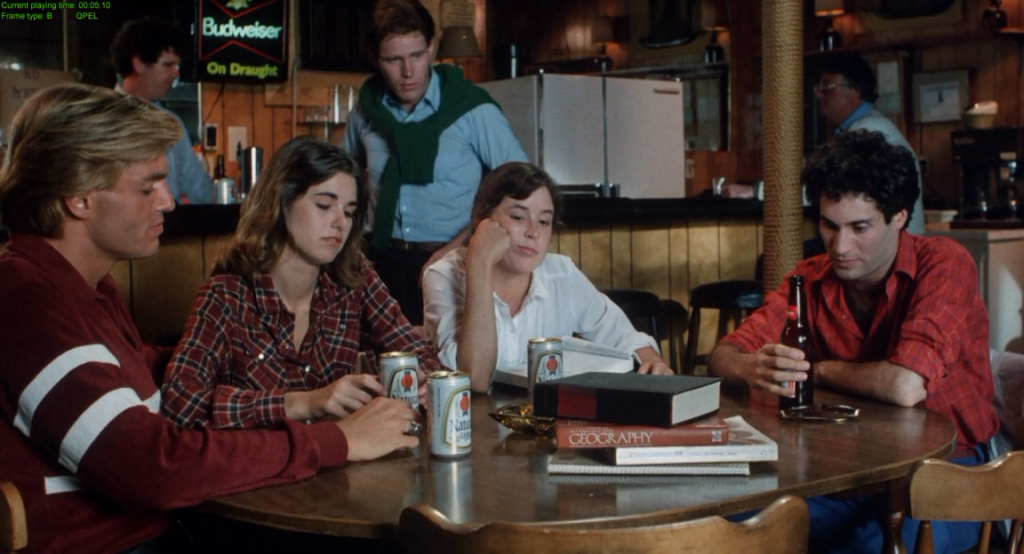 It’s safe to say that early impressions of The Mutilator are as baffling as they are straight up poor.

Over the film’s running time, you start to warm to everyone a little bit.  Ed is cheery and likeable.  He’s got a sense of humour, even though he’s fighting the script a bit.  Oddly, he only worked on a dozen or so little known films but we did cover one of them (the not very good Deadtime Stories). 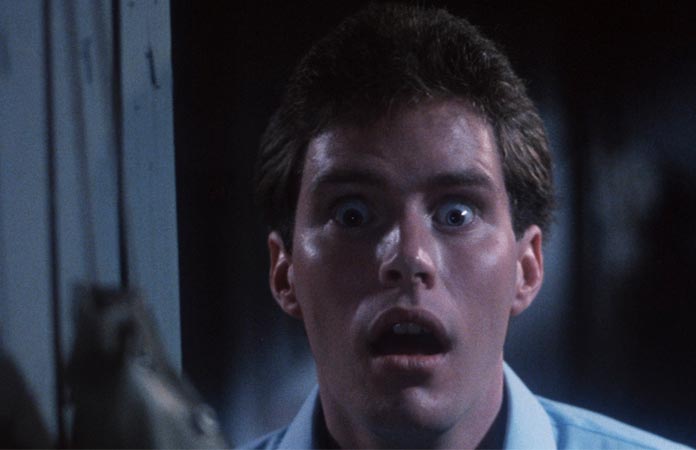 His best friend Ralph is the real star though.  This highly-energetic joker is exhausting to watch, and powerfully unfunny, but he’s so bad that he becomes kind of good.  He never worked again (aside from a quick role in Cat’s Eye) but he certainly steals every scene he’s in.

Along with Mike, Linda, Sue and Pam they arrive at the condo and settle in.  Although the warning signs are there (the door being unlocked for example) they soon settle down to a game of… Monopoly.  However, they soon realise that Monopoly is shit and they instead decide to go out and get themselves murdered.  Well, as good as.  Two of them go skinny dipping which is literally code for getting chopped to bits in this genre. 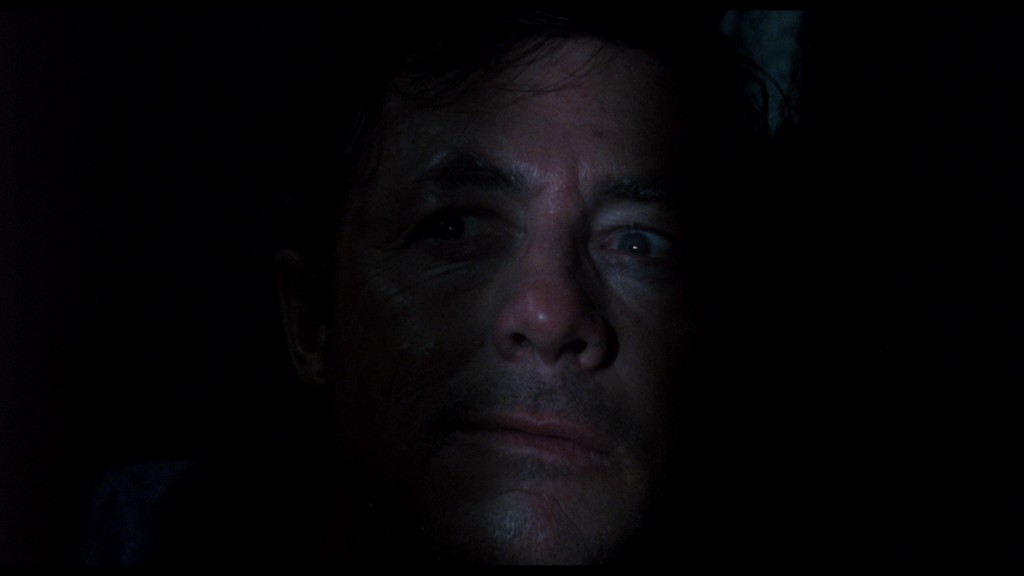 You see, Ed’s dad hasn’t vacated at all.  He’s living down in the cellar where all his tools are and he begins picking off the group one at a time.  He’s not supernatural like Jason or Michael Myers, nor is he particularly strong or athletic.  He’s just a bit loopy and the gang are all idiots.

We won’t spoil how the deaths come but they are clearly the reason Arrow got involved in this project at all.  Make-up and FX supremo Mark Shostrom (Videodrome, Evil Dead II) elevates the film with a display of DIY special effects that show a real level of creativity and ability.

Sure, it still often looks a bit silly and you’ll often see a little too much detail (this is Blu Ray after all) but it’s just great and in combination with the ridiculous acting and that soundtrack, the film has to be seen if you’re into your obscure ’80s nonsense. We can’t say it’s a good film or that the effects make up for everything else but as an interesting horror curio we are forever grateful to Arrow for resurrecting it. 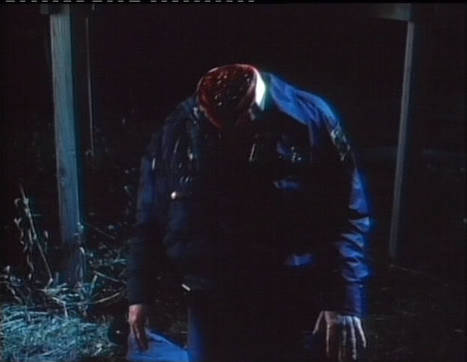 There is, of course, a whole suite of extras with documentaries and features (with plenty of the original cast and crew involved), two audio commentaries and some behind the scenes footage. It’s a remarkably complete package. Fall Breakers, a full-length documentary, is an essential addition here.

While the film itself obviously lacks when it comes to budget and casting, there is a real heart to it that cannot be denied. We’ve certainly seen far more cynical slasher films than this and in combation with this fully-packed Blu Ray, it’s fair to say Arrow have played an absolute blinder with this one. 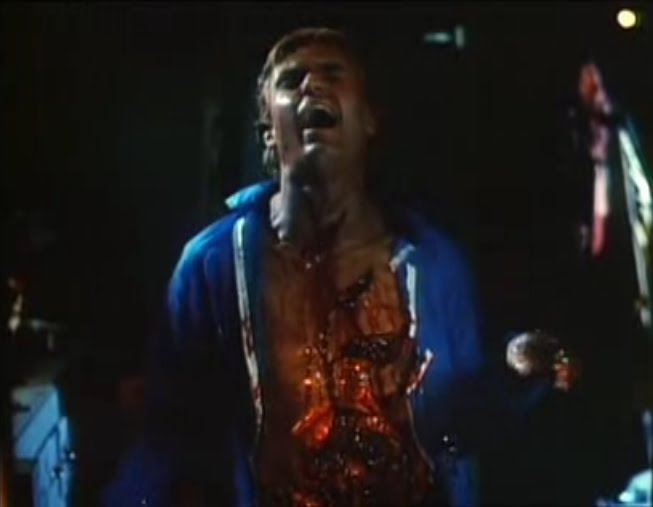 Quote of the Day! – Crossroads Ten reasons why Repo Man is the best film ever made.