Deadtime Stories is a 1986 portmanteau that is classified under horror/comedy and therefore should be right up our alley and with a paper-thin linking story and three full segments, the ingredients are in place for a portmanteau classic. There is just one problem with the movie. 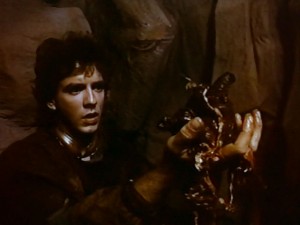 He may be the worst actor of all time but he wears his heart on his sleeve.

It is the worst portmanteau movie ever made.

The linking story is about a babysitting uncle who just wants to watch TV but is being pestered by his nephew who can’t sleep. As expected he tells the tales that form the segments of the film and the first story appears very quickly.

The first tale is a fucking car crash of a story about two witches and a young man who is helping them. He gets them the ingredients for their spells and their latest one causes a little bit of an escalation which requires him to lure a man to them (they need his hand) and before long he realises that helping these two mad women is not a great idea.

When they use him to kidnap an innocent woman he decides enough is enough and looks to help her escape. The only problem is that they need her to resurrect their dead sister. As things start to go wrong for them, this particular tale does take a couple of interesting twists and actually has a fairly hilarious alternative ending that it introduced quite smartly.

However, it’s not all good news. The witches do their best Dick Van Dyke style mauling of the cockney accent and the acting is generally atrocious. Some decent effects with the dead sister do make this the strongest of the three tales on offer though. Which you’ll soon come to realise is incredibly thin praise.

After a return to the uncle and his nephew, the next story comes up. This time it is a contemporary twist on Red Riding Hood. You’ve got Rachel, the Red Riding Hood in this story. She’s a college student who is sexually frustrated (for some reason that is important) and her and her boyfriend decide to have sex for the first time. 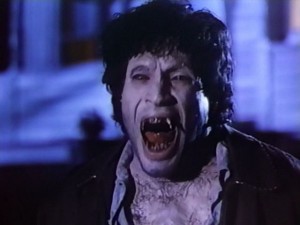 And no one’s gonna save you from the beast about to strike.

She also has a grandmother who needs her medication. As she goes to pick it up, an unsavoury gentleman is also at the pharmacy scoring some illegal drugs. After their drugs are mixed up, he tracks down the grandmother and tries to get his drugs back. It fails and he turns into a werewolf. Four years after An American Werewolf in London set the standard, this bullshit barely even tries to do a good transformation scene.

What follows is some standard wolf vs. Red nonsense and it all has a fairly ludicrous conclusion which is just powerfully stupid. Overall it’s not a very good story and it is pretty poorly presented. However, the film is about to get a whole lot worse.

There is another visit back to the linking story (which you’ll probably be checking your Facebook during) and then we are onto a reimagining of Goldilocks and the Three Bears.

This segment is the worst. Literally, no other portmanteau has delivered anything this bad. It starts with two men in a Mental Asylum (‘Home for the Hopelessly Insane’ according to the movie) who are broken out by a woman who uses the opportunity to run their carer over a couple of times with her car. 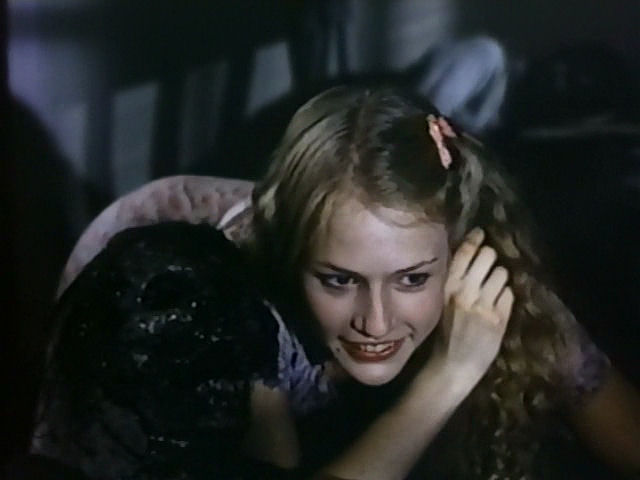 They are the Bears in this story and as they go off on a little crime spree, Goldi Lox is at their house. The thing is, she’s just as criminally insane as them. And she has psychic powers for some reason. Eventually they meet and continue their crime spree together.

The problem with this story is that it is presented as a Three Stooges style farce. With hokey acting, piss-poor jokes and no scares, it comes across as entirely childish. That’s kind of the point I guess (one that is rammed home at the end when they use something that’s very reminiscent of the Benny Hill music Yakety Sax) but that doesn’t make it watchable.

Occasionally they try to shock you with a pointless sex scene or another murder but this story completely misses the mark. 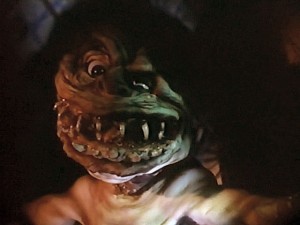 I don’t know what this is. Some sort of fucked up dog puppet or something.

Deadtime Stories returns to the linking story one more time and has a little twist in there for the viewer but, as with the rest of the movie, the execution is so poor that it makes the whole thing laughable.

I said earlier this is the worst portmanteau yet and that’s fair (although The Monster Club may be just as bad, this one is just fresher in the memory and has a completely unforgettable cast) but thankfully it’s nearly impossible to buy and is up on YouTube. So if you fancy wasting ninety minutes, you can either do this or watch a football match. As a QPR fan, I’m not sure which is worse.