The early ’80s truly belonged to Eddie Murphy, an on-fire stand-up comedian who transferred from the stage to Hollywood and starred in several successful films that were obvious vehicles for him.

Trading Places is a 1983 comedy that sees Murphy teaming up with fellow Saturday Night Live star Dan Ackroyd.  It’s a fantastic tale of two men whose fates are manipulated by the unscrupulous Duke brothers, a pair of stock traders who decide to take Winthorpe (Ackroyd), a high-powered executive and Valentine (Murphy),  a down and out beggar, and swap their situations to see if they can turn Winthorpe to crime and turn Valentine into a successful trader, regardless of how the two men are affected by it.

Ultimately, Winthorpe and Valentine figure out what is going on and it is up to them to get their own back.  It’s a truly wonderful movie full of great characters and scenes and it may well be the best film ever made.  Really, T8MC?  Why?  Well, I’ve got ten reasons for you.

1. Eddie Murphy when he was still hilarious.  He’s versatile too, switching from the initial street beggar (with Stevie Wonder stylings) to successful executive.  Whether he’s playing it for slapstick or completely straight, Eddie lights up every scene.

His best being when he’s arrested and he channels his inner Gene Wilder (in Stir Crazy) to intimidate the much tougher felons in the jail.

“Cause I’m a karate man! And a karate man bruises on the inside! They don’t show their weakness. But you don’t know that because you’re a big Barry White looking motherfucker! So get outta my face!” 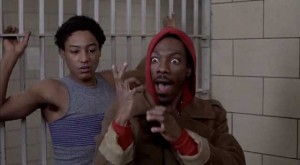 2. I’ve never been much of an Ackroyd fan but he’s devastatingly good in Trading Places.  His Dukes-inflicted decline seeing him drunk and dressed as a shambolic Santa which ends with him trying to eat a whole salmon through his fake beard. 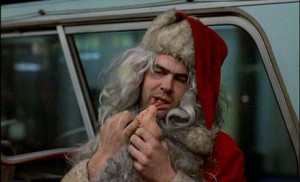 3. We’ve discussed it before, but Trading Places has the best ever one-line quote ever.

Louis: My God! The Dukes are going to corner the entire frozen orange juice market!

Ophelia: Unless somebody stops them…

[all turn and look at him] 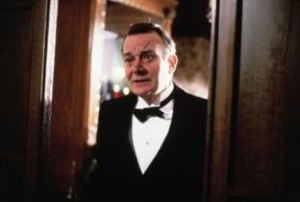 4. Although anyone who doesn’t see out each year by saying “Merry New Year” is off of our Christmas card list.  Indeed Trading Places is full of great lines.  Even just in that one scene.

“Oh, ho, ho, thank you for correcting my English which stinks!” 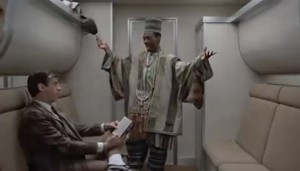 5. The scene where the Dukes teach Valentine the basics of trading.

Not the line but the dead pan look Eddie Murphy gives as he breaks the fourth wall.  Perfection. 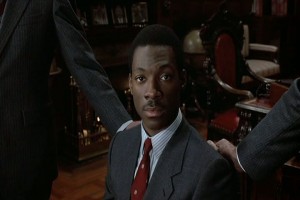 6. Nobody talks about it but you know the end of the movie and how that whole Wall Street sequence is crucial to the entire movie?  Admit it.  You have no idea what the hell happened.  No-one does.

Name another movie where an important movie-defining scene happens and no-one gets it but still loves the movie anyway. 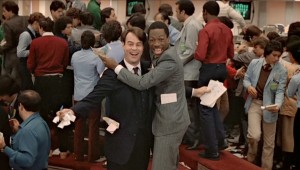 7. Also, I’m not sure anyone tolerates blacking up in movies either but we still love Ackroyd’s brief stint as ‘Lionel Joseph’ a rasta from Jamaica who has a short but glorious meeting with Eddie Murphy’s ‘Nenge Mboko.’

Louis Winthorpe III: Yah, mon, I was Director of Cultural Activities at the Haile Selassie Pavilion.

Billy Ray Valentine: I remember the pavilion – we had big fun there! 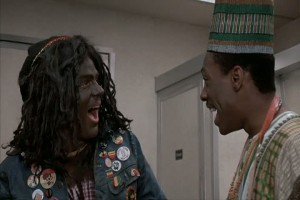 8. Jamie Lee Curtis.  We’ve never been completely sold on her but she rocks in this movie as Ophelia, a ‘tart with a heart’ who befriends Winthorpe when he loses grip on his former life.  She’s smart, sassy and sexy (male viewers will remember one scene in particular) and adds a huge amount of warmth to the movie.  As well as a bit of love interest for Winthorpe (who may want to get checked out at the nearest clinic when they get back from their cruise). 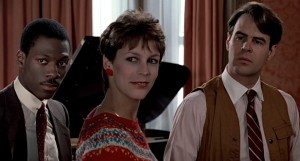 9. Clarence Beeks is the Duke brothers’ operative who sets up Winthorpe in the first place to help seperate him from his job, wealth, friends and fiance and then is in charge of stealing the orange crop report that sets up the final part of the movie.

He’s a bad-ass who doesn’t mind telling a woman at a public phone to ‘fuck off’ and eventually has a gun pointed at Ophelia (“No funny business or the whore loses a kidney”).

His rather creative comeuppance (at the hands of a giant ape) is almost too much of a punishment but fuck it, he had it coming. 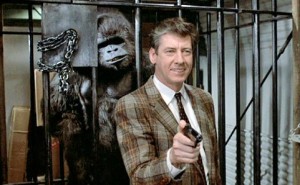 10. Comedy films need gloriously happy endings and the final scene is a lovely farewell to the movie. 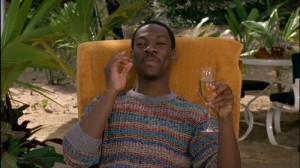 One thought on “Ten reasons why Trading Places is the best film ever made.”