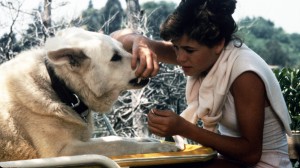 It’s not all good times here at T8MC.  As fun as it is to watch old favourites that you may not have seen in a couple of decades, or discover a classic that you might have missed, sometimes you end up watching stuff that is clearly not going to be good but when Netflix threw this recommendation at us, we couldn’t refuse. You see, White Dog is about a racist dog. Yeah, we’re in. This sounds hilariously bad.

Animal horror is one of those fun genres that can really throw anything at you, lest we forget Slugs, and while dogs have been done before, this is definitely a twist on the genre.

Julie Sawyer (played by Kristy McNichol) is an actress whose life changes when she runs over a dog one night. After taking it to the vet, she realises that it’ll likely be put down unless she takes it home and given that the dog is big, fluffy cuteypie she eventually starts to bond with it. Then one night, an intruder turns up and attempts to rape Julie (a scene that is given even more drama because initially the dog is unaware because he’s watching a really loud war movie for some stupid reason) which is a big mistake because the dog fucks him up for it. Who’s a good boy? Yes you are! Yes you are! 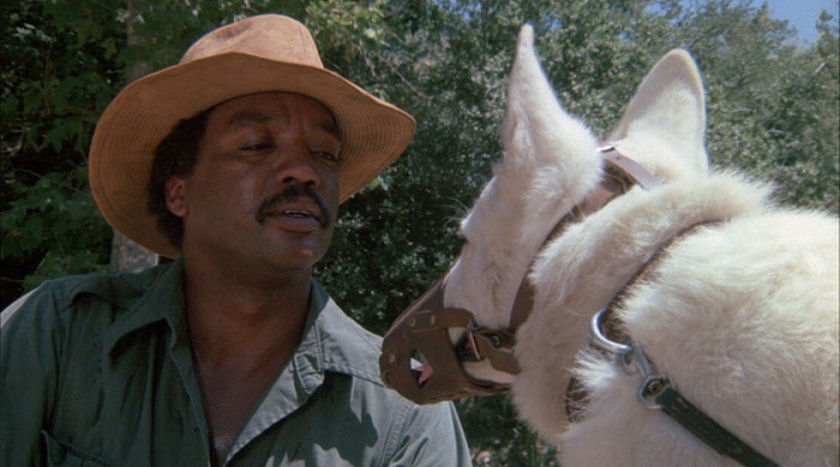 So at this point, Julie and the dog are pretty tight. He’s a bit prone to running off and having adventures but for the most part he seems friendly and protective. That is until he sees black people at which point he goes batshit crazy and tries to eat them. That’s no good but Julie isn’t ready to give up on the hateful pooch just yet and seeks assistance from a nearby animal trainer, Carruthers. A large, southern white bloke who seems dislikable enough to think that the film has plans for him. He’s not racist though so that’s something. He tells her that the dog is an attack dog and that there’s no unlearning ’em.

However, another trainer, Keys (Paul Winfield who is the police lieutenant in The Terminator), fancies a crack at the Hitlerian hound after the dog goes for him. At this point Keys, who is a black man, realises that the dog isn’t an attack dog. He is in fact a ‘white dog’ and has been conditioned to attack black people. And so begins the long process of training the racism right out of that dog. A long, scary process.

The chance for a good training montage is, regrettably, not taken advantage of and instead the dog chews his way out of his enclosure and heads off into town to catch up with some hate criming. He chases a black man into a church and kills him before Keys tracks him down and takes him back. At this point, Julie is all ‘like for sure fuck off, dog’ about it but Keys reckons the breakthrough is close (yeah, a break through your jugular vein) and refuses to give up on the prejudiced pup. 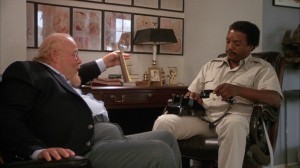 After a bit more training (a combination of hamburgers and undressing), the dog appears to be over his hateful ways. Keys isn’t sure the dog is ready but Carruthers in classic wanting to die behaviour insists that it’s done and the dog is fine. They call Julie who heads out right away to come and see for herself. However, as she leaves her house she runs into a kindly looking older gentleman and his two granddaughters. They reveal that they are the owners and Julie kicks off at the intolerant old bastard. He’s rather proud that he’s made the ‘best white dog ever’ and so she yells at him and tells the girls exactly what the biased bastard is all about before driving off.

It would have been nice if she’d driven into the old fucker’s face but instead that’s the last we see of him. Instead she arrives at the training centre. After a quick test to see if the dog will be okay with a black guy who hasn’t been training him for the last five years, it all looks good. But then the dog spots Carruthers and decides the south most certainly won’t rise again and kills him for essentially looking like the sort of racist sheriff type that you used to get in movies all the time. But he wasn’t racist which means the dog is now racist in a whole different way. Not that it matters as Keys shoots it before it can kill Carruthers. A thoroughly depressing ending but the film was never going to have a nice ending now, was it? 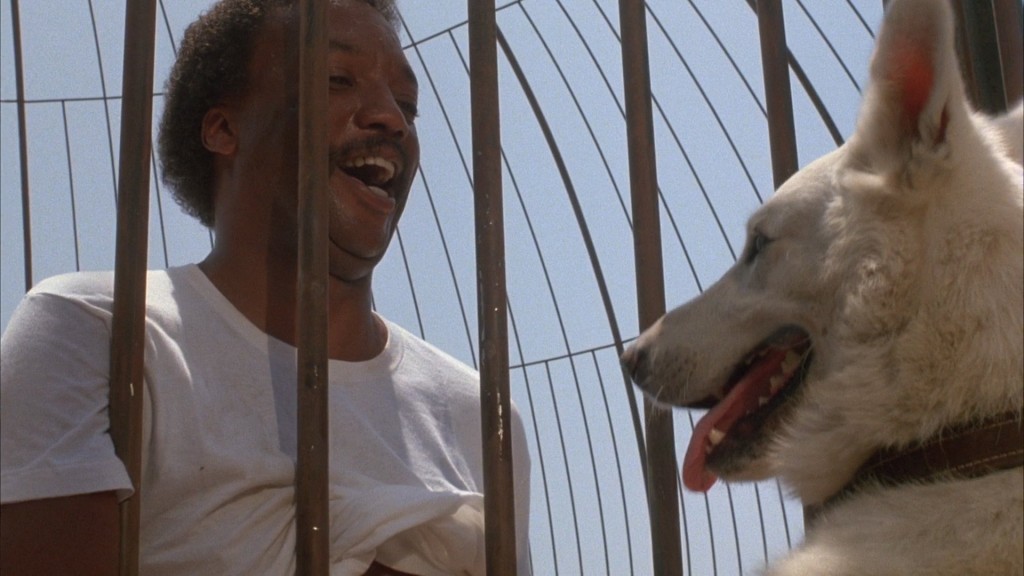 White Dog is a pretty slow movie. It deals with some strong themes though and does its best to not be too clumsy about it. Between Kristy McNichol’s sensitive performance and Ennio Morricone’s evocative score, there’s some things to like about this movie but it’s not horrific enough to be a horror, not thrilling enough to be a thriller and ultimately only serves as a commentary on an a side of America that is becoming more and more of a rarity as the years pass.

Interesting, the movie didn’t get a proper release back in 1982 after the studio, Paramount, bowed to pressure from groups saying that they felt the film was too controversial (an edited version got packaged out as a TV movie though). Watching it now, it certainly doesn’t come across as racist at all. It deals with those issues but certainly not in a way that can be seen as sympathetic towards racist views and when Julie has it out with the dog’s original owner, its very clear that we’re on her side. So, it’s a bit odd but if you want to see what all the fuss is about, the movie is up on Netflix. Not that our ‘to watch’ list isn’t already full of about a year’s worth of ’80s b-movies.

American Ninja (1985) Ten reasons why Tango and Cash is the best buddy cop movie ever made.