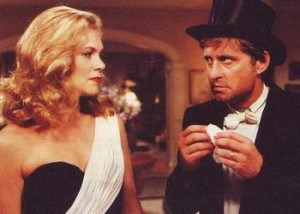 The War of the Roses is a black comedy that famously reunited Michael Douglas, Kathleen Turner and Danny DeVito for the third time after the masterful Romancing the Stone and its less satisfying sequel The Jewel of the Nile and I have to admit that the disappointment of them working together on something unrelated to those films meant that I ignored The War of the Roses entirely. Until yesterday that is.

Instead of the romantic comedy adventuring of the first two movies, The War of the Roses is a far darker tale that is directed by Danny DeVito and told through his character, Gavin D’Amato, a divorce lawyer who is still haunted by the case of Oliver and Barbara Rose.

D’Amato is telling his non-speaking client the story of how the Roses met and how their whirlwind romance led to seventeen progressively worse years as Oliver (Michael Douglas) neglects the marriage as he focuses on his work as a lawyer. Barbara (Turner) puts all her energy into building the perfect home but finds herself a little lost when the job is done and at that point her interactions with Oliver become more and more tense, to the point where you don’t really want to see it. 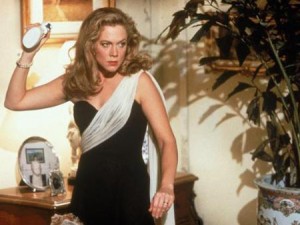 Indeed, while this movie is described as a black comedy, it really does use comedy very sparingly and usually in completely over-the-top moments where the Roses are trying to outdo each other in moments of either pettiness or outright cruelty.

The movie is a slow-burner with everything slowly deteriorating until a final sequence of almost surreal hatred that leads to quite the ending, one that is complete with an almost perfect final touch. 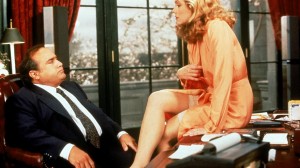 DeVito ends up being the under-utilised star here with his portrayal of sleazy lawyer turned traumatised family man providing the backbone of the story and the stark, almost-noir feel, provided by his direction is similar to DeVito’s great ’80s movie Throw Momma From The Train. Even if it lacks the memorable, and even likeable, characters of that film. Instead you’ll find it hard to pick a side in this war, with both characters crossing the line several times but that’s also the film’s strength.

It’s no Romancing the Stone, nor does it try to be, but there is some value to The War of the Roses and it’s blacker than black comedy. It kind of works as a twisted Christmas movie as well. Check it out but just don’t expect the return of Jack Colton and Joan Wilder.