The film starts in baffling form with this… we don’t know what this is.

Arrow Films have built a reputation for sourcing the best Italian cinema curios and have released The Visitor, a movie that is hard to explain when we’re not sure what the hell we just watched.

While the movie is set in the States and features a surprisingly strong US cast that add a great deal of weight to the film, it was written, directed and produced by Italians.  Really odd Italians at that.

From the first scene, the movie sets a strong ‘we’re going to do whatever we want’ kind of a tone with bold camera effects setting up what appears to be some sort of baffling sci-fi scene.  It’s all a bit ‘art’ and is a tad baffling.  Things don’t get better when the scene changes to a room full of bald kids being told a story of an ultimate evil force that turns children into pricks by a weird looking future-Jesus.  The occasional flurries of ’70s funk music help lighten the tension though.

Then a girl covered in either snow, rice or maggots (we’re not sure) shows up and the temptation is to watch something less weird.  However, before long the action settles in (then) present-day America.  Lance Henriksen shows up as Raymond Armstead, the owner of a basketball team who has seemingly limitless cash and a spooky eight year old who can make baskets explode with her scary eyes.

We don’t advocate punching eight year old girls but this kid definitely has a slap coming.

Raymond, it turns out, is in cahoots with a cabal of scary businessmen who are in league with an evil force (that’s either the devil or some sort of alien, we’re not sure) and they want him to father more terrifying children and, unluckily for her, his girlfriend Barbara is the only human with a compatible womb for them.  She’s not keen though as she’s kind of aware that Paige, the aforementioned basketball ruining devil child, is evil.

She’s right.  Katy is the most terrifying kid we’ve ever seen in a movie.  Paige Connor (who didn’t really go on to do much else) absolutely out- Regans Linda Blair with a performance that is admirable in that you’ll want her dead after literally every scene she is in.  It really is something.  Especially the scene where she is quizzed by a detective investigating an apparent accident that leaves Barbara in a wheelchair (an accident that creates a reaction from Katy that is second only to The Thing’s ‘you’ve got to be fucking kidding me’ scene when it comes to great reactions).

After that, it all goes a bit downhill for Barbara as Raymond and Katy constantly pressure her to have another child while Katy herself gets more and more evil and erratic. Although she does get some help from Jane, a housekeeper/nanny (played by Shelly Winters) who isn’t about to take any shit from Katy. 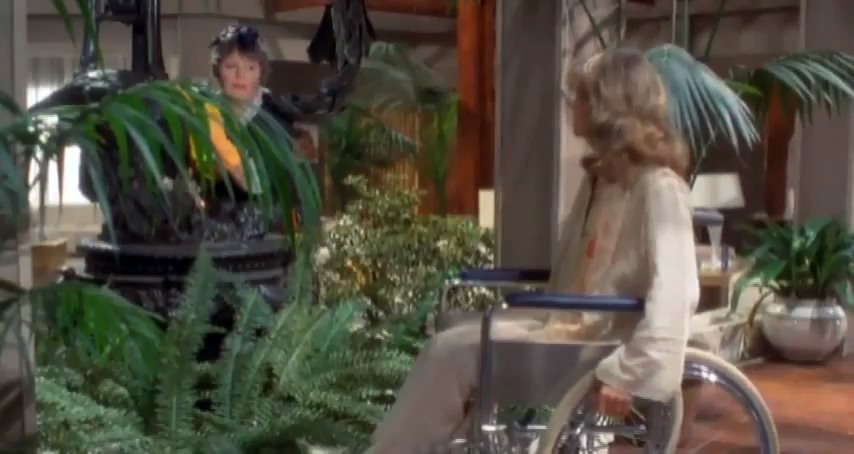 The scenes at home with Barbara are full of tension.

The titular Visitor is Jerzy Colsowicz (played by legendary director John Huston) who shows up randomly in an effort to redress the balance in favour of the good guys despite being like a hundred years old or something.  He must have been thinking ‘what on Earth am I doing on this film?  I directed The Maltese Falcon god damn it!).

It’s hard to explain just how insane the story here is without spoiling it so we’ll leave the details there but suffice to say, the film gets weirder and weirder all the way to the final showdown.  You’ll be baffled by most of it regardless.

The Visitor is an experience.  It was our first time watching it and at times it leaves you stunned at just how odd it is and how bad some of the writing is, while the cast (that also includes Sam Peckinpah) is extraordinarily high quality.  It is a lavish looking film that holds up well under the scrutiny of this Blu-ray release although there is a fair bit of wear and tear evident from the source but the film’s artistic vision certainly suits a hi-def viewing.

Katy and Jerzy playing Pong, a game which has an oddly prominent role in the movie.

The extras here are a little limited with just three interviews (plus an extra snippet courtesy of an easy-to-spot easter egg) and the original trailer but those interviews are great.  Lance Henriksen details exactly what he thinks of the film (he’s not a fan), Lou Comici talks about how hard it was to work as a screenwriter on the movie with a director who appeared to be an insane diva and cinematographer Ennio Guarnieri gives some insight behind the unique look of the film.

Fans of American-Italian sci-fi horror should check this out even though it’s maybe not a film we can recommend.  You should maybe see it once in your life though and this Blu-ray release is probably the best way to experience it.  We’re glad we did.  We just want to go and lie down now.

Ten reasons why Bloodsport is the daftest film ever made. Quote of the Day! – Throw Momma From The Train