The ‘buddy cop’ genre is the perfect vehicle for ’80s action comedy movies.  You’ve got twice as many heroes to shoot, punch and kick the bad guys and then you’ve got the comedy dynamics that come from two different characters (who will initially dislike each other) as they work together and eventually accept each other’s quirks.

Arriving late in the ’80s, Tango and Cash had plenty of time to learn all the genre conventions – this is a buddy cop movie that hits all them all – but also had time to perfect it.  Now, we’re very late to the party, having only watched this for the first time a couple of days ago, but Tango and Cash may well be the best buddy cop movie ever made.

The plot doesn’t take too many chances.  You’ve got two cops – Lt. Ray Tango (played by a bespectacled Sylvester Stallone) and Lt. Gabriel Cash (played by a scruffy Kurt Russell).  They are both kind of maverick but have a tremendous record when it comes to making big arrests.  This gets them onto the radar of Yves Perret (Jack Palance), a big-time arms dealer and mouse-obsessed psychopath who decides it’ll be a lot more fun to set Tango and Cash up rather than, y’know, just kill them.

He succeeds though and Tango and Cash are forced to plead no contest to manslaughter.  Expecting 18 months in a cushy low-security prison, they instead end up in a proper prison, full of people they put away and it’s up to them to survive, escape and ultimately clear their names.

Alongside such heavyweights as Lethal Weapon, 48 Hours, Beverley Hills Cop and Dragnet, singling out Tango and Cash as the best ever buddy cop movie is a big claim but here are ten good (read: utterly spurious) reasons why.

1.  Blade may get all the attention for having the strongest opening to an action film ever (although the Dawn of the Dead remake’s breathless opener may have something to say about that) but Tango and Cash may have it beaten.

Tango faces down a moving truck armed with just a tiny pistol, forces the driver (who just so happens to be the much-missed Robert Z’Dar to brake suddenly, causing him and his passenger to fly through the windscreen.  And when the truck looks like it isn’t carrying anything untoward, one of the local cops taunts Tango, who is played by Stallone, with “Who d’ya think you are?  Rambo?”

He replies with “Rambo’s a pussy!” before shooting the truck’s fuel tank to reveal it is full of cocaine or something.

2.  And that’s only the start of it.  Cash’s intro is great also.  Sporting the same scruffy look as one Martin Riggs, Cash is headed home admiring his achievements as reported in the local paper.  Then, while he is checking himself out in the mirror, a Japanese hitman shoots him twice.  For some reason, Cash is wearing a bullet-proof vest, and so he gives chase.

A chase that sees him commandeer a civilian’s car, crash it into a car that has a couple having sex in it (first boobs appearance within ten minutes – the ’80s) and then decides the easiest way to stop the escaping hitman is to violently crash his newly-borrowed car into another car, shunting that into the hitman’s stolen SUV.  Bloody hell!

3.  Every action movie needs a bad guy but it also needs a second-in-command bad guy.  Usually a sadistic son of a bitch.  Requin (played by Brion James) is that character.  What makes him stand out though is his baffling English accent.  It’s awful but makes his dialogue even better than it should be.

When Cash is about to be tortured and killed in prison by a huge gang of inmates, he only has one thing to say.

To which Requin responds with “you fucking wanker!”

And when Tango and Cash have him hanging by his feet off of a rooftop and threaten to drop him, Requin is on even better form.

4.  The rule in these films is, the badder the guy, the badder the death.  Now usually that means someone has to be flung off of building but when given the chance, they don’t actually do this to Requin.  Instead he gets a live grenade put down his pants.  Bleak.

The brilliantly named Face (Robert Z’Dar’s character) gets his payback when he is thrown onto some live transformers and is dramatically electrocuted to death too.  Justice!

Face: “Out on the streets, this pig and his cop friends, broke my ribs, my leg and my jaw.”

Cash: “You broke THAT jaw?”

6.  Terri Hatcher plays Kiki, the love interest in the movie, and when Cash goes to see her (doing her job as a sort of stripper/dancer) the cops move in and take the club over.  Seeing a male stripper his size he asks him what size jacket is he wearing.

When you then see someone walking past the cops in that jacket (and a motorcycle helmet), you expect it to be Cash.  It’s not though.  It’s Kiki.  Cash follows up dressed as a woman.  Which somehow works, despite his face having the exact same dimensions as the large-screen TV that I watched this film on.

Kiki, plays her role out to the fullest, obligingly getting herself kidnapped and held at gunpoint by Perret later on in the movie.  As per the rules.

7.  At some point in this kind of film, a mandatory time limit has to be set on things and so Captain Schroeder (played by the recently departed legend Geoffrey Lewis, who was in Night of the Comet and Annihilator) gives them 24 hours to take down the bad guy before he has to re-arrest them.

Sanctioning what is essentially a military assault on an at that time clean businessman seems like a career decision to me.

He also gets one of the best lines in the whole film.  After Tango dives through a screen door to take down Schroeder (believing him to be an intruder) he says “is this how you screen all your guests?”

8.  Indeed at times the dialogue is ridiculous.  After getting their hands on a customised SUV (customised in that it’s been pimped up with nitrous oxide and a lot of weaponary), Tango and Cash decide to give Perret a visit on his own turf.

After crashing through the front gate and playing Twisted Metal with the small army of henchmen Perret has on the payroll, Cash asks Tango “do you want the good news or the bad news.”

When Tango asks for the bad news, Cash reveals “we’re almost out of gas”

“And the good news?”

It’s all very silly but at that point Kurt Russell is in full-on Jack Burton mode so who cares?!

9.  Teri Hatcher’s odd semi-stripper routine is baffling.  Yes, she’s undeniable gorgeous and she does kind of start taking some clothes off but stops after a while and starts playing electric drums, completely out of time with the music (‘Don’t Go’ by Yazoo for godsakes!).  We don’t understand it but that’s art for you. 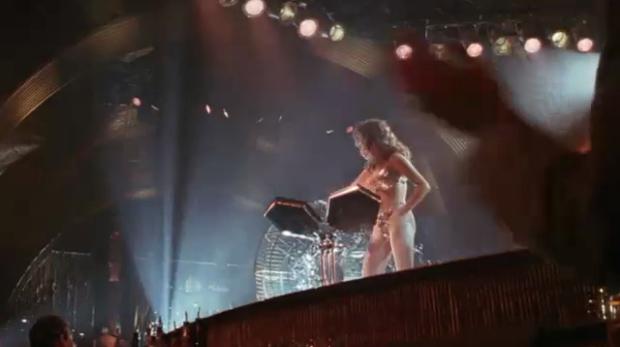 10.  The film is undeniably cheerful all the way through.  When Tango and Cash are taking down bad guys, it’s all one-liners.  Cash cheerily interrogates a man by putting a chair on his throat.  After shoving a grenade in fake English Brion James’ trousers (which has to be a stressful thing to do) Tango says “that’s my contribution to birth control.”

But no moment is cheerier than the film’s climax.  They’ve killed the baddies, they’ve got the Teri Hatcher and they’ve escaped from the warehouse (which is inexplicably wired to self-destruct violently by the owner).  They celebrate by discussing whether or not Cash is allowed to date Kiki (who is Tango’s sister by the way) before cementing their new friendship with a big, old high five.  YAY!