Many people will have Scrooged down to watch as part of their regular Christmas routine. I should be one of those people but every year I forget to watch it or am otherwise indisposed and then the moment is over. After Christmas, if I’m in need of a Bill Murray fix I go to Ghostbusters or the mighty Groundhog Day.

So, yesterday I actively made a point of watching Scrooged again for the first time since Ms Spurrier put the film on in high school for us back in 1990 and my irritating mate Stu ruined it by laughing at literally everything. He repeated the same trick with T2 a few years later, despite T2 having like two mildly funny moments. 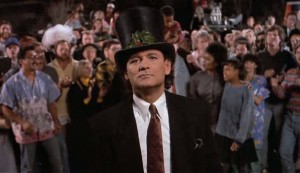 Anyway. Scrooged still delivers. It is, of course, a reimagining of the classic ‘A Christmas Carol’ and a blatant Bill Murray vehicle. That’s okay though, back in the ’80s Bill Murray was so unfuckwittable that films that were 99% about him looking deadpan were completely acceptable.

Bill plays Frank Cross, a cynical TV executive who is just a empty-hearted suit with a baffling hairdo. After setting up the first part of the film by showing him being a heartless humbugging monster, we get into the ghostly visitations part of the story as the ghosts of christmas past, present and future help Frank take a good, long look at himself.

The insane hair of Bill Murray.

The ghosts themselves are fantastic with David Johansen, the craggy-faced singer for The New York Dolls, putting in an amazing turn as the Ghost of Christmas Past and a hectic Carol Kane doing a fine job as his Present counterpart. The non-speaking, kind of terrifying Ghost of Christmas Future has his moments too and while the story isn’t going to throw any twists at you if you know the story, it’s still a perfect Christmas family movie.

The ending is odd and echoes that of Stripes in that it has Bill doing that odd singing thing that he occasionally does. It probably worked a lot better in a cinema full of whooping Americans but it’s still good fun to see. Not sure you’d get away with such silliness now but Bill Murray can do exactly what the fuck he wants. Them’s the rules.