Bloody hell.  This very English portmanteau is possibly the oddest film we’ve covered here on T8MC.  The Monster Club (1980) is a three-parter anthology horror film and it is ridiculous on so many levels.

The linking story features the peerless Vincent Price as Erasmus, a vampire that bites a horror author and then decides to make it up to him by inviting him to his favourite club (the titular Monster Club).  The author, played by John Carradine (father of Keith from Southern Comfort and, more recently, Dexter) is unsure until Price says it’ll be a good source of inspiration for him.

The club itself is a music venue which adds a frankly baffling musical component to the movie as each of the stories is bookmarked by terrible live music sections.  It’s a bit like watching the classic ’80s TV comedy The Young Ones but not good.  Not good at all. 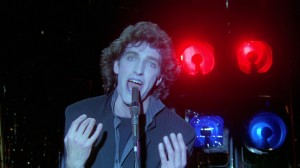 One of the many ridiculous musical performances in the movie.

Aside from the awful music, there are a load of people dancing in really bad masks.  Now, I want to give the film some benefit of the doubt but I think these people are actually meant to be monsters.  If I’m right then the film’s make up director is literally the worst at what they do.

Erasmus begins to explain the various breeding combinations of vampires and ghouls before settling onto the subject of the film’s first proper segment.

This segment tells the sad story of The Shadmock, a sad ghoulish man who lives alone with his antiques and stack of money.  He hires a woman, Angela, to help catalogue his collection and she reluctantly accepts after seeing his weird face.

Unfortunately, this is because she’s being put up to it by her conman boyfriend who wants her to steal everything she can.  After getting to know each other, Shadmock proposes to her.  She eventually agrees to marry him (again under duress from her boyfriend) and plans to steal his money from his safe during the engagement party. 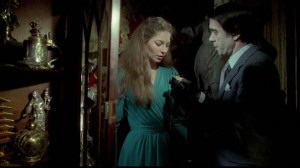 Don’t mess with men that look like Kevin Eldon.

Shadmock catches her raiding the safe during the party and tells her he doesn’t care about the money, he just wants her.  She, rather unwisely, decides to tell him she could never love him which causes him to whistle at her.

Unfortunately, his whistle has a habit of roasting living things and the segment ends with the conman boyfriend waiting for Angela at home.  When she returns, as a toasted mess, the boyfriend goes mad and is locked away in an asylum.

The whole segment is a mess of over-acting, misjudged scares and poor make-up effects but the ending is genuinely sinister (in a creepy English way).

This slightly-comedic tale tells the (pointless) story of a meek child who is moved to a new area by his family and ends up being bulled (unconvincingly) at school.

His home life is a little happier except that he only gets to see his father, who works a night shift and sleeps all day, for a couple of hours each day.  This is obviously because the father is a vampire but the film makes sure to portray him as a nice enough chap. 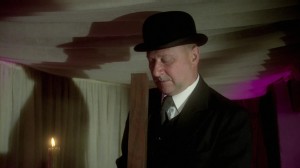 Donald Pleasance is never not scary.

Eventually the son’s bullying is noticed by a creepy vampire hunter, played by the ridiculously sinister Donald Pleasance, who follows him home to kill the father which he appears to manage to do.  However, there is a twist when the vampire bites him and reveals that he was wearing stab-proof clothing with a fake blood bag in it.  The vampire hunter is then killed by his own men.

This story is DOGSHIT.  Everything about it is rubbish, including its poor attempts at humour.  Even Donald Pleasance can’t save what is arguably one of the most rubbish things we’ve ever seen. 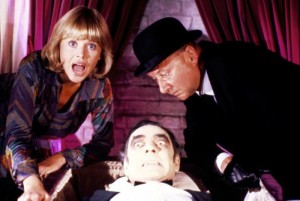 Awfulness. Britt Eckland is cute though.

The final segment of the movie is probably the best but that’s not saying much.  It tells the creepy tale of Sam, a movie director who goes to a Norfolk village to scout for locations for his latest film.  However, things turn sour for him pretty quickly when the village’s creepy residents refuse to let him leave.

It turns out they are all ghouls who like to like to eat recently-deceased humans and he’s on the next menu plan.  Fortunately he meets Luna (played by someone with the acting chops of a Doctor Who extra) who advises him to hide in the church as the ghouls cannot cross hallowed ground. 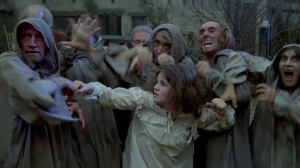 This was made in the ’80s. Allegedly.

Eventually they attempt to escape which doesn’t go so well as Luna is brained by a rock and dies.  Sam does get away and finds a couple of policemen.  However, they drive him back to the village before revealing that they too are ghouls (while showing off some terrible dentistry effects).

It’s a moody tale with a very Hammer House of Horror ending.  The bad effects and hammy acting do it no favours though.

The movie ends with Erasmus convincing the Monster Club to make his new human friend a member by detailing all the horrible things humans do to each other before awkwardly dancing with a fat woman to the final music performance of the film.

What the hell did we just watch?