Based as it is on one of the greatest TV shows of all time, Twilight Zone: The Movie (1983) is full of great ideas and is one of the most varied and original of all the American horror anthology movies. It also features some powerhouse writers and directors, including the late, great John Landis.

Indeed Landis gets things going with both the intro and the first proper segment. The intro sees Dan Aykroyd and Albert Brooks driving along and trying to relieve the boredom when their cassette tape gets chewed up. A fun game of ‘name the theme tune’ ensues before Dan memorably asks “do you want to see something really scary?”

He looks away, turns into a demon and chomps Albert Brooks on the neck. Eeek! And so it begins. 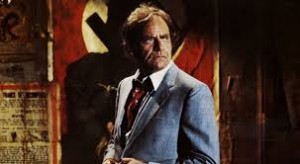 Bill finds out the perils of being a massive racist.

‘Time Out’, the only segment of the film that was written for the movie, tells the story of embittered racist, Bill Connor (played by Vic Morrow who tragically died on set in an accident).  Bill hates Jewish people, black people, Vietnamese people and basically everyone who isn’t white.  After loudly, and offensively, bemoaning the state of the nation in a pub (and winding up everyone there), Bill leaves and finds himself on an unfamiliar street.

It’s unfamiliar because he’s in Nazi Germany and to make matters worse, it turns out he’s a Jew.  Bad timing.  He gets chased and shot at before eventually being corned on a ledge of a building and used as target practice by evil Nazi officers before falling to the ground.

That’s the least of his troubles as he finds himself on the ground with a gang of KKK scumbags looking over him and getting ready to hang him.  Yep he’s black now and living through the least fortunate episode of Quantum Leap ever it seems.  His escape from that situation sees him ending up as a Vietcong soldier and, well you get the idea.

It’s an incredibly strong tale, stunningly acted.  Tough to watch and as powerful now as it was in 1983, this is a great opener to the movie. 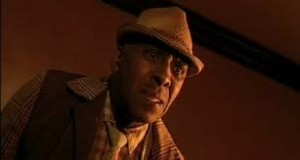 The mood lightens a lot with ‘Kick the Can’ which, surprisingly for this type of movie, isn’t a horror tale at all.  Instead it focuses on the residents of Sunnyvale, an old folks home.  As they go through what’s left of their lives, a new resident, Mr Bloom, begins talking to them about what it was like to be a child.  They reminisce about the simple joys of playing games like Kick the Can.

However, it’s apparent that there’s more to Mr Bloom than meets the eye and that night all of the residents (apart from the token moody bastard) wake up to find they are children.  After a fun night of playing, they decide it’s probably best if they go back to being old.  That is apart from Mr Agee, the charming British resident who decides ‘fuck that’ and goes off to get laid.  Top man.

It’s a heartwarming, if slightly twee and sickly, tale (unsurprisingly when you consider it was directed by none other than Steven Spielberg).  It brought a lump to our throats though so shut up! 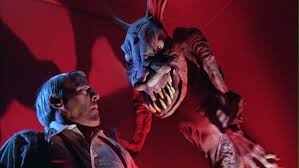 The horror returns with ‘It’s a Good Life’, a cautionary tale of what happens when you befriend children.  In this case, Helen Foley, a mild-mannered school teacher, knocks over Anthony and gives him a ride home.

When she gets there, she notices Anthony’s family (which includes Nancy ‘Bart Simpson’ Cartwright!) are a tad odd.  They should be though as it turns out that Anthony is an evil monster child whose wishes come true and he’s forcing them to live in a nightmarish cartoon world.

Helen eventually realises that anywhere else in the world is where she wants to be which sends Anthony into a manic rage.  She eventually calms him down and they go off to live a more normal life.  Apparently.

It’s an odd tale but it has some stellar special effects and is probably the creepiest of the tales on offer here. 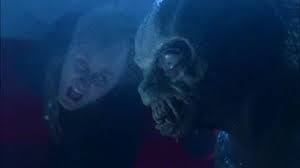 Plane-mangling demons are not what you need when flying already cacks you up!

Last up is ‘Nightmare at 20,000 Feet’ which is the film’s most iconic segment.  Based on the famous Twilight Zone episode featuring William Shatner, this sees John Lithgow (who recently played a fantastic Trinity Killer in Dexter) as a particularly nervous flyer whose fears are more than realised when he spots a demon on the wing of the plane that is intent on destroying the engines.

This whole segment is captivating and Lithgow’s performance is completely stunning and the effects are strong enough to draw you into the chaos of the story.  Without a doubt this is one of the best portmanteau segments of any movie.

Overall this is a great anthology movie.  The stories are scary, powerful and thoughtful when they need to be and there’s not really a weak one in the mix which is unusual.  It’s a shame they didn’t make more of these really and The Twilight Zone had enough great stories for a dozen movies.