When Ghost Stories hit cinemas in 2017 it was quite the surprise. Sure, there are always plenty of horror anthologies released every year (just look in our archive of reviews for them) but for one to be given a bit of a budget and an actual cinema release is pretty rare.

The film is co-written and directed by English stage and TV actor Andy Nyman and League of Gentlemen co-creator Jeremy Dyson, with Nyman also taking the starring role in the film. As such, this is a very English affair that evokes memories of the old Amicus portmanteaus as well as the modern-but-not-modern feel of the League of Gentlemen.

Andy Nyman stars as Professor Phillip Goodman, a professional sceptic whose TV work sees him debunking various fraudulent psychics. In the film’s linking story he receives a letter from Charles Cameron a similar TV sceptic who has been missing, presumed dead, for decades. He asks Goodman to come and see him and, in as grumpy and unpleasant a way possible, he tells him that he is the fraud and that the stories are real.

He then challenges him to solve the three cases that he couldn’t and each of these mysteries becomes one of the three sections of this portmanteau. 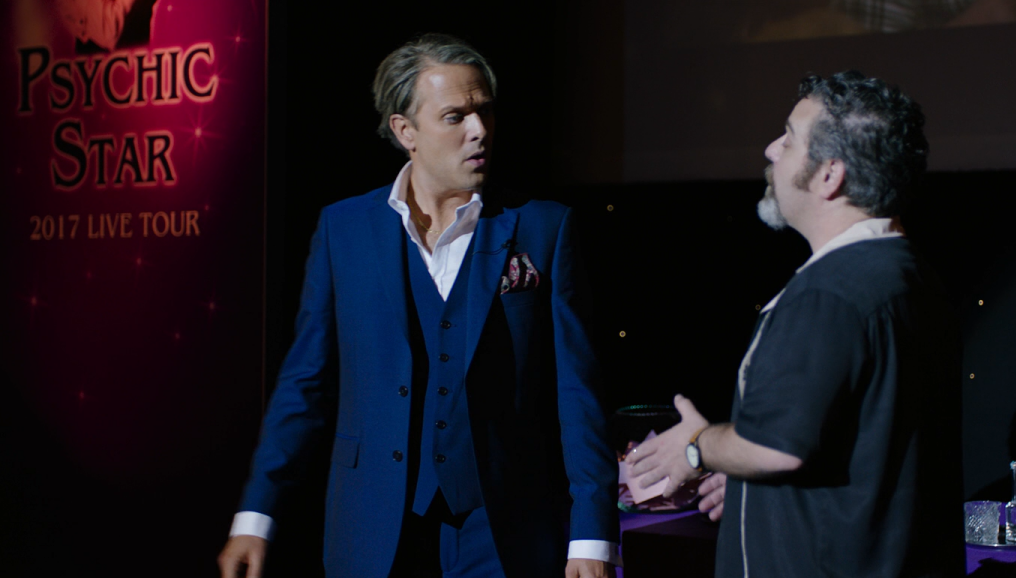 The film’s first short story begins with Goodman meeting Tony Matthews, a former nightwatchman who claims to have had an encounter with a ghost in the building he was guarding.

Tony, played by Paul Whitehouse who is best known as Harry Enfield’s comedy partner, after some early cockney bantering explains how he was terrorised by a spirit who haunted the building which used to be, get this, an insane asylum for women. So far, so generic. 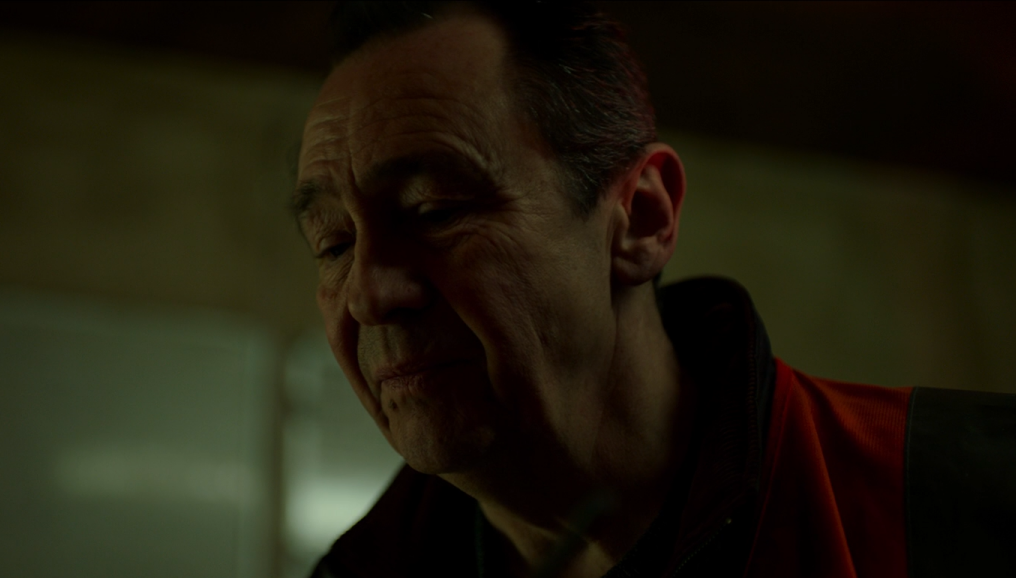 His story plays out as a series of moody psychological horror moments (the power is unplugged, his cup of tea is moved) before resorting to a tiresome section where Tony inexplicably goes down every scary corridor he can find. His flashlight flickering on and off just to make sure every possible trope is adhered to.

The scares, as predictable as they are, in this section are reasonably effective but the payoff isn’t and there’s nothing in Tony’s story that makes it sound unsolvable which makes you realise early on that the writing for the whole film isn’t going to be up to par.

Ultimately though this story struggles because of Paul Whitehouse who just isn’t an actor and Tony ends up feeling like a character from one of his sketch shows.

Alex Lawther, who we recognised from Black Mirror, stars as Simon Rifkind who meets up with Professor Goodman at his parents home. There’s some initial weirdness with Simon looking obviously demented right from the off. His parents also stand motionless in another room, indicating early on that something weird is going on.

In this story Simon explains how was driving without a license one night in the middle of nowhere (you know… because) when he got into an argument with his parents over the phone.

Distracted, he hits something. Worried that it’s a person and already absolutely terrified, he goes to check and sees something that isn’t quite human. It looks like a demon of sorts and when he drives away his car starts to cut out, stranding him in the woods. 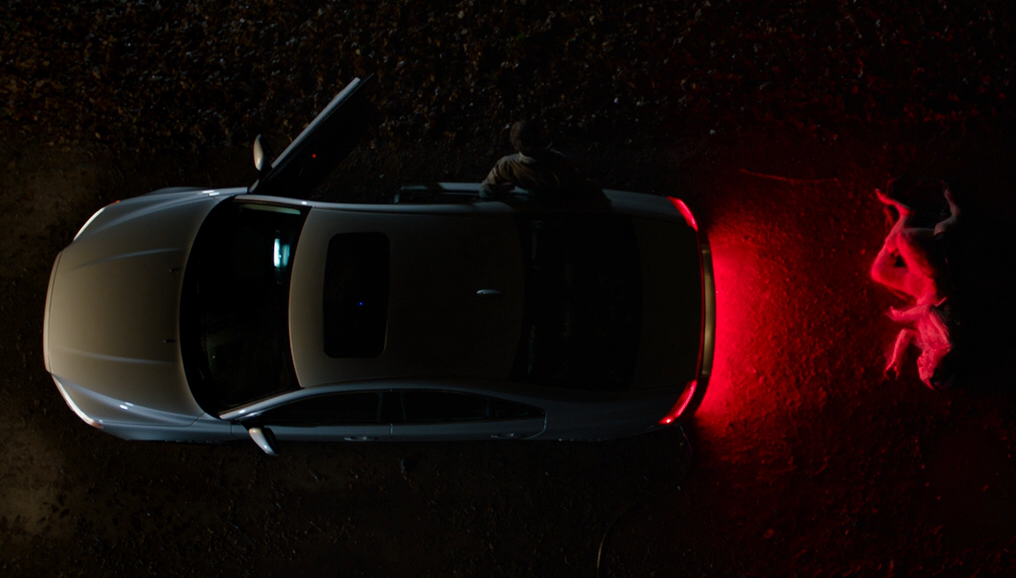 At this point the demon comes for him. Which means lots of Simon looking around in the dark and whimpering while we don’t actually get to see a whole lot.

Alex Lawther chews the scenery a fair bit with this one. He looks really scared but also looks like an actor who is putting on being really scared. The sort of acting that you see on something like Doctor Who.  He does have some effective moments but his best one is a comedic one.

The scares didn’t really land in this story, making it the weakest of the three overall and after the whole former insane asylum story line in part one, we were hoping for some originality and a car breaking down in the middle of nowhere was never going to give us that.

Goodman’s third and final case is that of Mike Priddle, a very successful banker who builds his dream house in the country so that him and his wife can start a family.

However, as his wife is giving birth, Mike is at home and after a few moments of weirdness he becomes aware that a ghost is there with him.

It turns out to be more of a poltergeist though and as the supernatural displays of minor vandalism progress, Mike gets a phonecall that his wife has died in childbirth and that something isn’t normal about the child. 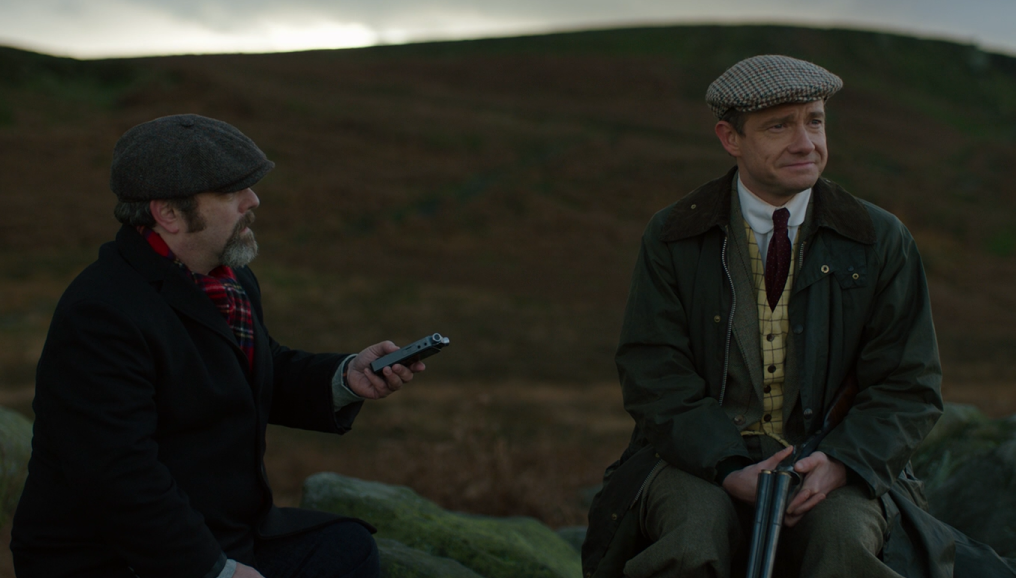 This section also has a few problems. The scares are fairly legit but typical poltergeist fare. Martin Freeman’s performance is a little too chipper throughout. He seems to have mastered that sort of English awkwardness and now that’s all he can really play. As such his performance here is much the same as those Vodafone adverts that he’s in. A sort of mixture of weirdness and smugness.

This section does end quite strongly though and leaves you wondering how things will tie up. With the linking story featuring quite heavily before and inbetween the segments, it then gets a lot of payoff. 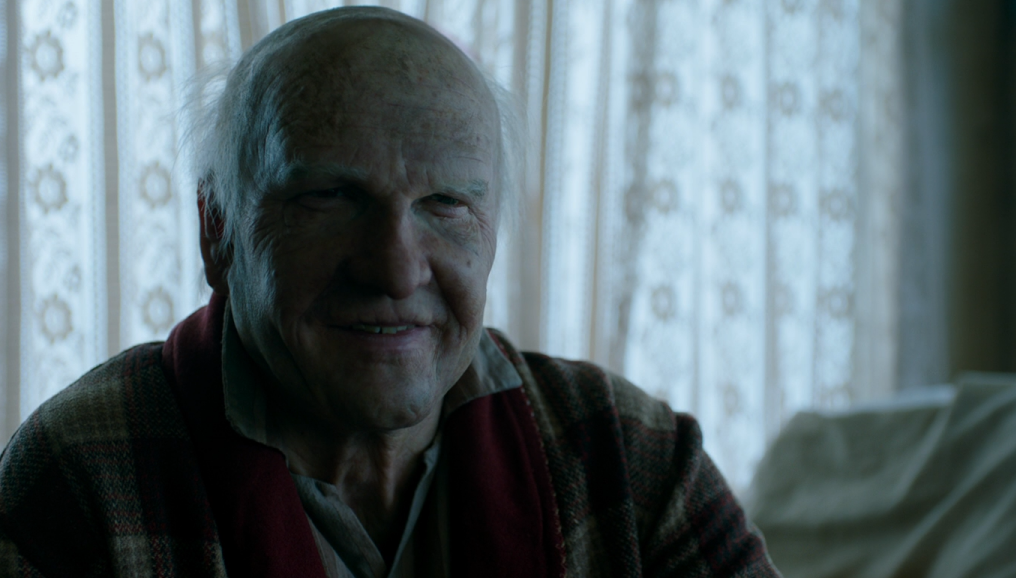 Of course not is all as it seems with Charles and as that story resolves, reality more or less breaks down for Goodman who ends up being confronted with some ghosts of his past.

It’s good when portmanteaus link everything together and Ghost Stories tries to do this but in the end the result feels cobbled together and not very easy to buy into.

Andy Nyman’s one-note performance continues throughout and is never really believable. Because I couldn’t buy into him, I couldn’t buy into any of the situations he was in and the fact that the film resorts to another standard horror trope for it’s linking story (bullied kid dies in an accident at the hands of his tormentors) it makes you feel like Ghost Stories never had an original idea to call its own.

In the end the poor acting and cliched writing really spoil the film but there is a level of polish to the whole thing and some of the scares are reasonably effective.  Also, it was actually very well received by critics and fans alike, so what do we know?  Well, we know we probably won’t be watching again in a hurry.

Karate Kid 3 is better than the first one Annihilator (1986)