Sylvester Stallone used to have real box-office draw in the ’80s you know. Him and Arnold Schwarzenegger were the only guys in town that really mattered until JCVD & Bruce Willis 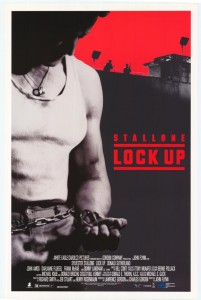 showed up later in the decade. Here he is in an insert action star vehicle featuring an ace turn from Donald Sutherland as a sadistic warden and an early appearance from Tom Sizemore.