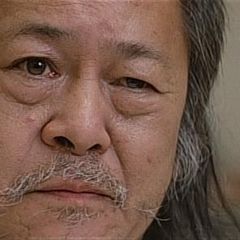 Can see things no one else can see.

We love ourselves a John Carpenter film here as you’ve no doubt already gathered, one of our favourites being 1986’s Big Trouble in Little China. Along with another forthcoming HITG in James Hong, one of our favourite characters was Egg Shen, ably played by Victor Wong. As befits a prime candidate for HITG, he’s been in quite a few films, more than you’d realise in fact.

What makes him special: He had Bells Palsy which gave him his characteristic squint but he made it part of his schtick. His genial manner lent itself well to the roles he played.

What he’s been in since: Seven Years In Tibet (turgid Brad Pitt stinker), Tremors (worm appetiser), Mystery Date (crappy teen movie notable for James Hong also being in the cast)

He started acting late on in his life, his first film credits not taking place until the early 80s. Before his death in 2001, he appeared in more than thirty movies. One would appear to be as a fighter in Bloodsport, but that has to be another Victor Wong. Although Bolo Yeung was fifty when that was made, but his physical prowess is a bit more impressive than Vic here.

Victor, you were ace and still remain the ultimate Asian wizened HITG!